Home » Looking for an internship? Why not volunteer in the bush

Looking for an internship? Why not volunteer in the bush 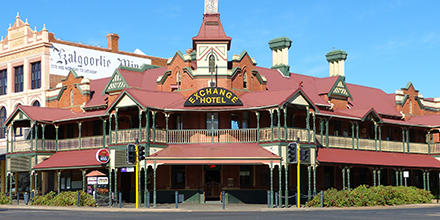 I think the main thing that made it incredible was the amount of responsibility they were willing to give us.

News reports of the August 2016 riot in Kalgoorlie, which was sparked during a protest over the death of an Aboriginal teenager, prompted fourth-year students Kyle Fong and David Ierace to travel to Kalgoorlie-Boulder in December and do what they could to help while learning on the job.

“Both Dave and I thought it would be interesting to go there to actually understand what the issues are,” Kyle said.

“It’s a world that’s completely removed from where Canberra is and basically we wanted to help out as much as possible.”

As well as listening to client interviews, taking client instructions and researching case law, helping out also turned out to mean representing clients in court. The law in Western Australia and the Northern Territory allows laypeople to seek leave from the court to appear as a friend, meaning Kyle and David could represent clients in could for simple guilty pleas, bail applications and adjournments.

“Spending three months there was really good and I really got a vibe for the place as a whole because you’re working one-on-one with a lot of Aboriginal clients,” Kyle said.

“I was going to the prison every week by myself and taking instruction from clients. You meet some of the most interesting people out there.”

David said he would recommend the experience to any law student looking to get more industry experience.

“I started thinking maybe I shouldn’t feel limited by the range of scholarships and internships offered through ANU and pretty much coinciding with that was the riot,” he said.

“I think the main thing that made it incredible was the amount of responsibility they were willing to give us. That was mostly due to their lack of resources but once they saw that we were competent they gave us that responsibility.”

While David started his law degree with an interest in criminal justice and legal welfare, Kyle said coming to ANU had broadened his views around social justice.

“I wouldn’t have entertained doing an elective on criminal law but this semester I’m doing criminal justice and because of my exposure out there I’m definitely more interested in criminal law now,” he said.