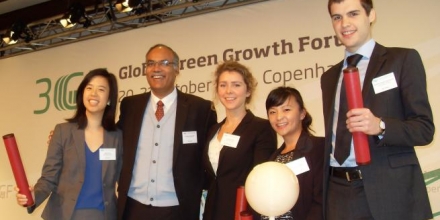 A team of four ANU College of Law students has taken first place at an international law moot in Copenhagen, successfully arguing the benefits of using solar energy to create hydrogen fuel.

The team, called Terra Solis, received a trophy of a 3D printed globe that lights up, from the Danish Prime Minister Helle Thorning-Schmidt.

In their project, the students, Sue-Lin Wong, Alexander Ferguson, Jeanine Wong and Olivia Kelly, called several science experts from around the University to garner ideas.

The team then combined several different products, used to create renewable energy, into one product, based on the advice from the experts.

The four students say the technology would produce liquid hydrogen which would be transported around the world as an alternative to fossil fuels that are currently used.

“We think that something like solar fuel is a real equaliser.”

Her colleague, Alex Ferguson, who is studying Environmental Science and Law, says the competition required students to produce projects that integrated the fields of law and science.

“Energy makes up about 30 per cent of the world’s emissions. If we could cut all of that out then we would be making a significant contribution to climate change,” he says.

Although the product is not commercially available, the students say they hope to see it on the market in the future.