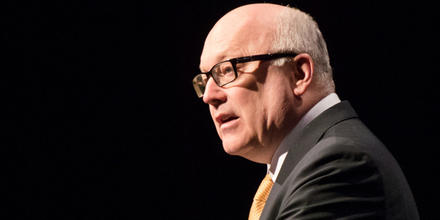 We call on the Australian government to reverse the cuts and invest in the legal assistance sector to promote access to justice for people across Australia.

Deans of over thirty Australian law schools have today called on the Federal Government to reverse plans to cut funding to community legal centres.

“Community Legal Centres have a significant role resolving disputes in Australia.  They are at the coalface in protecting women and children from family violence.  Many of their clients are disadvantaged and need help” said Professor Patrick Keyzer, Head of La Trobe Law School.

“We urge the Federal Government to reverse their decision not to continue funding Community Legal Centres, and to ensure adequate funding is available so that people across Australia can assert their legal rights and access justice,” said Professor Keyzer

“Funding cuts set to commence in July will weaken the mission of university law schools to effectively engage with our communities, as well as the overall efficiency of the Australian legal system.”

“With my colleagues across the country, we call on the Australian Government to reverse the cuts and invest in the legal assistance sector to promote access to justice for people across Australia,” said Dr Bröhmer.

James Farrell from Community Legal Centres Queensland welcomed the Deans’ support. “For decades, community legal centres have worked with law schools, their staff and students to provide legal help to people who would otherwise fall through the justice gap.”

The impact of these funding cuts have been recognised by lawyers, community organisations, domestic violence services, churches, and now the Deans of Australia’s law schools.”

“With community legal centres nationally facing a 30% cut in federal funding, the Deans have added their voice to the chorus of groups advocating for the Government to properly fund legal services, and make legal assistance available to people who need support,” said Mr Farrell.

Deans of law schools across the nation have joined forces to lobby the federal government to stop funding cuts to legal assistance which they say will deny access to thousands of people and put pressure on the private sector to plug the gap.

Pressure is building on Attorney-General George Brandis from across the legal profession, after corporate law firms warned they cannot possibly fill the void and the Australian Bar Association launched a campaign to promote access to justice through proper funding.

"Reduced funding will mean diminished service capacity which will have flow-on effects throughout the sector and ultimately on the effective and efficient administration of the justice system as a whole," warned 33 law school deans from across the nation in an open letter to the federal government.

Federal funding to community legal centres is due to fall by 30 per cent from July 1, in a funding cliff the coalition blames on the former Labor government's failure to provide for funding beyond four years. Labor argues the funding program was consistent with common four-year cycle budgeting practices and is pressing the government to extend it.

The debate over blame is of little consequence for the sector, which now faces very real cuts threatening the existence of some and the ability of others to help those in need.

In 2014 the Productivity Commission found the federal government needed to inject an extra $120 million a year into legal assistance for a sustainable and resilient sector; plus $80 million from state and territory governments. Since, the sector has instead fought funding cut threats; any increases have specifically targeted family violence.

The law deans warn the funding cuts will undermine their "ability to educate the next generation of lawyers about the importance of access to justice in Australia," by threatening strategic relationships with community legal centres to offer clinical programs in which students can cut their teeth.

"We call on the Australian government to reverse the cuts and invest in the legal assistance sector to promote access to justice for people across Australia," the deans write.

"Law schools are part of the wider legal community which understands how important it it to support access to justice," said Melbourne Law School dean and signatory Carolyn Evans.

"We know that thousands more people will miss out on legal help with these federal funding cuts," he said.

"The impact of these funding cuts have been recognised by lawyers, community organisations, domestic violence services, churches, and now the Deans of Australia's law schools."

On Friday night, attorney-general Brandis succumbed under threat of a contempt of court order to a freedom of information request from shadow attorney-general Mark Dreyfus, releasing his diaries which revealed he had not engaged in extensive consultation with the legal assistance sector about cuts.

The high-profile Public Interest Advocacy Centre is among those affected by the pending cuts, albeit in a less direct way. It could lose more than #660,000 - up to 52 per cent of its funding - due to a large chunk of its public purpose fund allocation going to other underfunded centres in need after the Commonwealth cuts.

"Cutting the money from CLCs is really a false economy because it passes greater costs down the line when a legal need is not met," said PIAC CEO Jonathon Hunyor.

"We work a lot with vulnerable women who may be facing a whole range of issues - bills they're having trouble paying, protection from violent partners, tenancy repairs to make premises secure, victims of crime. If you can help people with those problems you can help stop them become homeless. CLCs are great at early intervention."

Legal aid services in the United States are facing their own battle, after the Trump government's budget blueprint revealed funding to the Legal Services Corporation would end, triggering a backlash from lawyers across the nation including via a letter signed by 150 law firms to the White House protesting the move.