Law graduates encouraged to tackle change and crisis by ‘being good’ 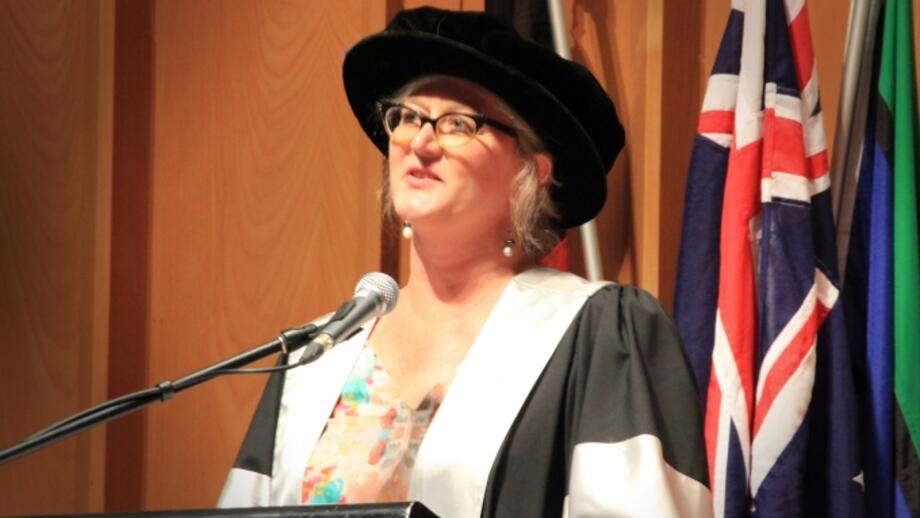 Director of global change management consultancy Kapacity.org, Dr Natasha Cica, has encouraged graduates of the ANU College of Law to not only be good, but to be very good.

In a speech delivered against a confronting backdrop of a hostage crisis in Sydney – which challenged many Australians’ assumptions about certainty and security – Dr Cica spoke to graduates about crisis, change and how ‘being good’ could help lead to more positive outcomes.

Address at Conferring of Awards

Chancellor, Vice-Chancellor, distinguished guests, new graduates, colleagues and friends, It’s so wonderful to have the opportunity to address you on this very special day for this graduating class of the ANU College of Law.

I remember coming back to Canberra for my own ANU Law graduation, back in 1991 – which (incredibly to me) is now twenty-three years ago. I was living in Sydney then.

By day, I was qualifying for legal practice at ‘the other’ College of Law, and at night I was working for Allen Allen & Hemsley to pay for it. I stayed with my parents at University House. My Tasmanian mother and I had a little argument about me wearing trousers to my law graduation. ‘An elegant dress is a more appropriate outfit for a Sydney solicitor,’ she said. I stubbornly insisted on having my way.

Those were still the days when a handful of judges wouldn’t recognise you in court if you were a woman who ‘wore the pants’ (any pants – even very elegant Von Troska pants, which these were). But mum’s dead now, and today in more maturity and kindness to her I chose to wear a nice frock.

There’s another death that’s affected my presentation today. You all have been following the terrible breaking news in the past few days about the hostage crisis in Sydney. I was of course not the only person holding my breath all Monday night awaiting the resolution of that situation.

For me there was a hook for too-close discomfort, because so many of the people with whom I was a law student and a trainee solicitor, at ANU and then in Sydney, work almost literally on top of the Lindt café in Martin Place.

As we now know, two captives were killed in that hostage situation. One of them was a thirty-something barrister called Katrina Dawson. This highly talented lawyer and beloved mother of three children was not my close personal friend. But people I am close to were her friends and colleagues at the Sydney bar. A number of them have since told me they feel blessed to have escaped her fate.

So what should I say to anyone whose professional career in the law is just beginning? And in the many wonderful endeavours law can make possible?

Before Katrina Dawson was shot, I thought I would give you a simple message: be good.

Now she is gone, it’s even simpler: be very good.

Here are three ways to be very good.

First, be very good at what you do. Be unafraid and unashamed of pursuing and demonstrating excellence. I was happily struck in the face by a big culture shock when I left Tasmania as a teenager to study at ANU in 1986 – once I had figured out how to actually find the campus, after getting lost in what felt like a million silly roundabouts. The difference was, here at ANU I found a welcoming, critical mass of intellectually gifted and culturally literate individuals, who worked very hard together to translate that to something noticed and worthy of note in the wider world – outside the academy, outside Canberra, and outside Australia.

Of course, there are people like that everywhere, including Tasmania (which certainly has changed in some important ways since 1986 – on this front, thank you David Walsh of Tasmania’s Museum of Old and New Art, for being very, very good indeed). But it’s the critical mass – and the institutional culture supporting it – that makes the difference. That is still one of the great privileges and indeed brand advantages of attending ANU.

Never take that privilege and advantage you have accessed here for granted. You won’t necessarily enjoy it in other contexts.

Don’t forget that this privilege and advantage add up to a kind of power. Don’t let that go to your head, and never turn into a monstrous ego on stilts.

But don’t ever undersell yourself. Don’t let anyone ‘put baby in the corner.’ Especially if your parents have no connections in the law or other professions, especially if you are a woman or belong to another group that’s underrepresented in key sites of decision-making, and especially if you have a surname that people struggle to pronounce even when you spell it very slowly. As one of the many great public lawyers at ANU taught me – a key tool of equity is a shield, not a sword.

I know there’s that terrible joke about lawyers and rats, which says the difference is there are some things that rats won’t do. But the discipline of law, and indeed of the rule of law – and both are disciplines – teach us about how to use the system and procedures of power in our society in a proper, responsible and fair way. That’s regardless of whether you are lawyering in the service of private clients or in the public interest, because the two are so often deeply intertwined.

Looking back at some of the ‘crucible moments’ of my own life and career, it is the ‘process power’ I learnt at ANU that helped me be most effective.

These moments included working for Liberal backbencher Petro Georgiou to challenge the Northern Territory’s mandatory sentencing laws after an Indigenous teenage boy had suicided in gaol; working as an adviser to the Beazley Labor leadership team through the Tampa and September 11 crises in 2001; and working with a national coalition of arts organisations to overturn the sedition laws that subsequently were passed as part of a package of national security legislation. (Here I am having a fabulous flashback to then-Democrats Senator Natasha Stott-Despoja in a Senate Committee hearing, wearing a pastel suit and peep-toe shoes, explaining sotto voce to our current Federal Attorney-General George Brandis, the meaning of ‘hip hop.’).

It was always my legal training – and often also my ANU Law network – that helped me make a case that people listened to, or at least had to work much harder to dismiss.

Scrolling forwards to today, Australia clearly will require more people in our systems with the cleanest possible process skills to respond in a coherent and civilised way to the Lindt café attack, and what may or may not come after it. Here’s part of a message from a barrister friend of mine who was evacuated from his nearby rooms on Monday:

[I] hope that maturity and sensitivity stand up to the demagogues over the coming days as predictably ignorant, easy and lucrative criticism is made of bail law and of refugee policy. I have no difficulty with criticism of either; I have some criticisms too; but history tells us that hard cases make for bad law and for bad policy. If we realise that, then such change as may be appropriate is the better for everyone except those who profit from grief and fear.

The third, last and probably most important way you should be very good is by being virtuous.

I don’t mean be a moralistic goody-goody-two-shoes. Nor a wowser.

I do mean you should practise virtue in the way that great thinkers like Aristotle and Martha Nussbaum have advocated it – as a journey which develops your own character, enhances human flourishing, and adds (or holds) the kind of value that contemporary management fashions increasingly strip away.

There are lots of role models and mentors for this.

Among the best for me at ANU was the late Professor Lesley Zines – the master of constitutional legal process par excellence, beautifully described at an ANU function some time ago by our current Chancellor, Gareth Evans as ‘the Scarlet Pimpernel of the Australian Constitution.’

Terrifying sometimes, but indeed a man of virtue, especially when I did not seem to share his politics, which was often.

Another of the best for me at ANU was Professor Livio Dobrez, who taught me Australian literature as part of my Arts degree. Livio constantly reminded me of the power in the poetry of language. He taught us the magical Wongar. If you haven’t heard of Wongar, find his books and read them.

Some of the work I enjoy most now is on initiatives that build real capacity with leaders.

This recently has included a new global program called the Inglis Clark Circle, working with younger and emerging leaders. Earlier this year, I delivered its global pilot in Belgrade, Serbia, with the generous support of the Australian Embassy in Belgrade and local ngos. This was followed up by dialogue-based work I delivered in a bespoke and beautiful space called THINKtent – first with Belgrade Design Week in the Museum of Contemporary Art Belgrade, and later at an inspiring event in Fruska Gora called the Tesla Global Forum, which advances the humanist legacy of scientific genius Nikola Tesla.

The participants in all these fora were mainly at your stage of life or career, across many disciplines. Many of course were Serbian or from the wider Balkans, which means they inhabit a post-conflict society with economic, social and systems challenges that most Australians can’t begin to imagine negotiating.

The striking thing this cohort had in common was a sincere, persistent, proactive and articulate focus on how they could be very good people – people who do not damage each other, their society or the planet – not just successful professionals.

Courage, trust, integrity, creativity, faith, honesty, risk, wisdom, respect and love were some of the key words of virtue I took away from that summer in Serbia.

In turn, I would like you to take them away with you today.

Play around with them, be as provocative with them as you dare. Work hard at them when you need to – you know the meaning of hard work, which is why you are graduating today – because positive change never ‘just happens.’

And always remember – be good.