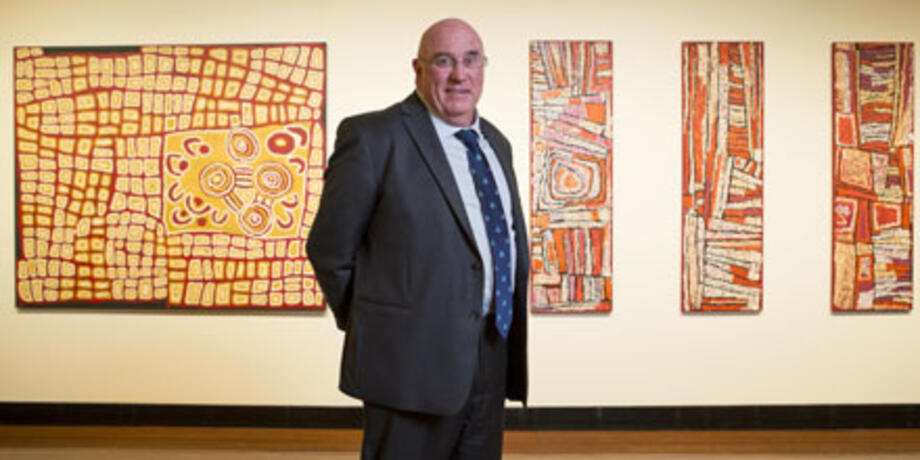 Craig Edwards and some of the Indigenous art he's donating to the ANU Drill Hall Gallery. Image: Lannon Harley/ANU

The gift is estimated to be worth more than $9 million and includes 124 western desert paintings from Mr Edwards' personal collection. It is the most significant single donation of Indigenous art to an Australian university.

ANU Vice-Chancellor, Professor Brian Schmidt said the University was thrilled to receive such a significant gift.

"This is an inspirational act of philanthropy on the part of Craig Edwards, and we are delighted that he has chosen ANU to be the custodians of this extraordinary collection," said Professor Schmidt.

Mr Edwards has been an enthusiastic collector of Aboriginal art for more than 30 years and has spent much time in the western desert.

"I was captivated by some of the monumental works of the desert artists. I always thought they did their best work on a large scale and it's fair to say my love affair with the art became something of an obsession," said Mr Edwards.

Mr Edwards said as his collection grew, he placed some of it on show in Central Australia, hung and rotated works in the offices of his law firm, and loaned works to regional galleries from time to time, but the volume of the collection and lack of resources to show it began to feel overwhelming.

"I've had a strong and long connection to the Drill Hall Gallery and ANU and it was an obvious choice to donate here, especially with the high degree of public access it will give," he said.

"ANU has been good to me. I had a wonderful time doing my degrees at the University and the education I received opened up a lot of opportunities in my life.

"The Drill Hall Gallery is open to the general public and that was a really important factor for me but also I want the collection to be a resource for students who may be doing research into related topics."

Mr Edwards is a prominent member of the Canberra community, helping many people through the work of his law firm.

"This is a gift that will enrich the cultural, visual and intellectual fabric of our campus as a whole and we're thinking carefully about how and where we can bring Indigenous art to the front and centre of our new ANU spaces," he said.

"We owe a great debt to Craig and are deeply grateful to him for his amazing generosity. These works will enhance the quality of life on the campus for generations to come."

A major exhibition of the works is planned for October at the Drill Hall Gallery to celebrate the gift.