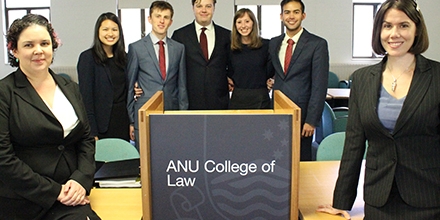 Australia’s best and brightest law students are coming together at the ANU College of Law for a week of intense debate as they compete for the chance to represent Australia at the 2016 Philip C. Jessup International Moot Court Competition to be held in Washington, D.C.

The competition, regarded as one of the most prestigious mooting competitions in the world, sees teams of law students from universities across Australia undertake a week of mock proceedings based on fictional disputes between countries.

As part of the process, teams prepare oral and written pleadings – arguing both the case of both the applicant and respondent – in the same way they would for a real case, and appear before a bench of ‘judges’, many of who hold senior positions in law and legal practice.

Deputy Dean of the ANU College of Law, Professor Don Rothwell, said the Jessup International Moot represented a significant commitment for participating students, and that the College was especially pleased to host the Australian preliminary rounds of the competition.

"This is the most prestigious mooting competition in the world and Australia has an enviable record in the international competition which is now in its 57th year.

“Indeed, six of the last 10 competitions have been won by an Australian team, including the 2015 competition, which saw the University of Sydney beat more than 550 teams from 80 nations.

“The success can be put down to the high standard of the Australian teams, but also the extraordinary guidance and support from the Australian legal fraternity, particularly by ANU alumni and staff,” Professor Rothwell said.

This year, more than 37 ANU alumni have volunteered to be involved in this year’s Moot, primarily on judging panels, including ACT Human Rights and Discrimination Commissioner, Dr Helen Watchirs OAM, and the Honourable Richard Refshauge SC, both of who will judge the semi-finals held in the ACT Supreme Court.

The final will be held at the High Court of Australia on Saturday afternoon, with students appearing before a panel of judges that includes High Court Justice Michelle Gordon.

The successful teams will travel to Washington, D.C, to represent Australia in the international finals in April.

The ANU College of Law is being represented by students James Barrett, Dan Trevanion, Matilda Gillis, Tara Peramatukorn and William Randles. The team is being coached by College lecturer, Dr Kate Ogg with support from Imogen Saunders.