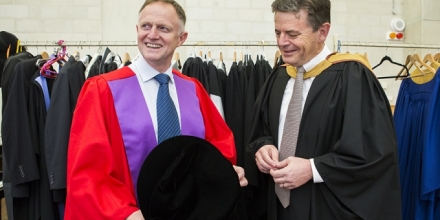 High Court Justice the Honourable Stephen Gageler has been awarded an Honorary Doctorate by ANU for his contribution to public service and the practice of law.

Justice Gageler, who graduated from ANU in 1982 with a Bachelor of Economics and a Bachelor of Laws with First Class Honours, is the first Alumnus to be appointed a High Court Judge.

After completing his law degree at ANU, Justice Gageler served as an Associate to High Court Justice, Sir Anthony Mason, before working as a barrister specialising in constitutional, administrative, revenue and commercial law.

Prior to his current role with the High Court of Australia, Justice Gageler was the Solicitor-General of Australia between 2008 and 2012, where he represented the Commonwealth in several landmark constitutional, administrative and commercial law cases. He has a Master of Laws from Harvard Law School, and was appointed Senior Council in 2008.

“Justice Gageler has made – and continues to make – a significant contribution to legal thinking through his extra-judicial scholarship in areas such as public law and judicial process,” Professor Young said.

Since completing his undergraduate law degree, Justice Gageler has maintained close ties with ANU, including tutoring in Constitutional Law, and was announced as a distinguished alumnus of the ANU College of Law in October 2015.