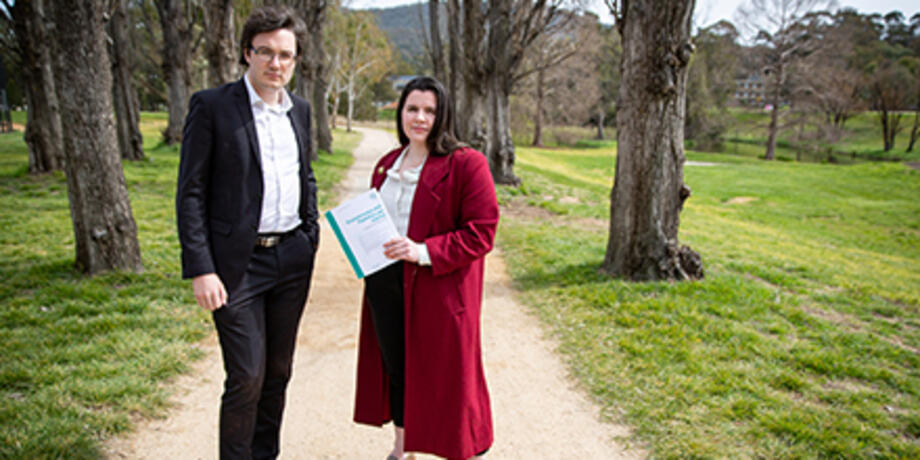 The purpose of the law is to balance the needs of everyone – how can we create policy that achieves its purpose without unduly harming other areas of society.

‘Lawfare’ and ‘green tape’ are common criticisms levelled by conservative commentators, politicians and business lobbyists at public interest litigants when major developments and jobs are delayed by legal challenges to environmental approvals. In recent years, our federal environment laws – the Environment Protection and Biodiversity Conservation Act 1999 (Cth) (EPBC Act) – have come under fire for enabling “lengthy and costly legal battles”.

However, a research article by students from The Australian National University (ANU) College of Law published in the Environmental and Planning Law Journal has dispelled this notion amid a once-in-a-decade review of the EPBC Act.

“The aim of our article was to tap into the debate that’s happening right now over whether or not the existing standing provisions in the EPBC Act are leading to ‘lawfare’ – the idea that public interest litigants are taking advantage of these provisions to launch vexatious litigation to disrupt major projects. It’s a politicised, hot space,” said Annika Reynolds, a Bachelor of International Security Studies/Laws (Hons) student and founder of ANU Law Reform and Social Justice research and policy group GreenLaw, which conducted the study.

“What we can do as researchers and future lawyers who are putting forward empirical research and talking about things from a policy perspective is really coming out of that emotional space. The purpose of the law is to balance the needs of everyone – how can we create policy that achieves its purpose without unduly harming other areas of society.”

While there has been a previous ANU-led empirical review of cases under the EPBC Act, the GreenLaw study is the first of its kind to examine all 32 litigation case and court orders under the Act between 2009 and 2019. Research was undertaken during the 2019-20 summer by Annika, Andrew Ray, Sarah Norgrove, Nicholas Bulbeck and Shelby O’Connor. 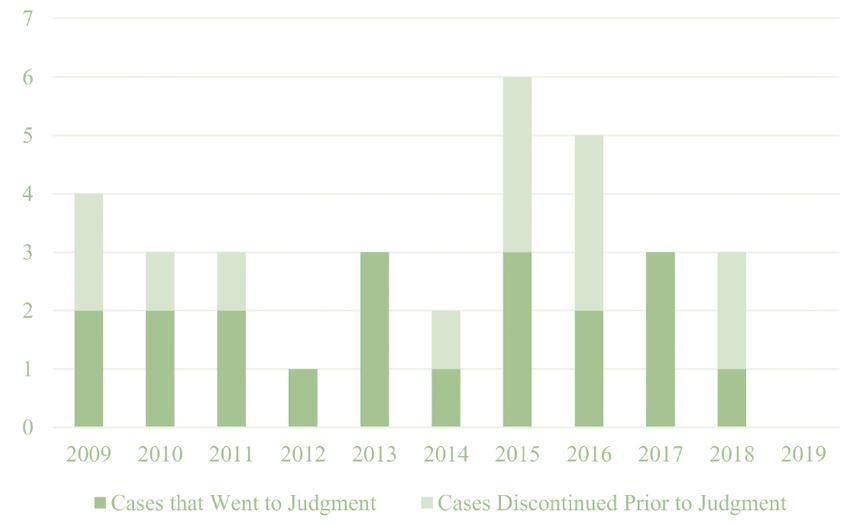 The GreenLaw study found just 3.2 public interest cases were filed each year under the EPBC Act between 2009 and 2019. Graph: GreenLaw

“All this highlights that, despite this narrative of ‘lawfare’ and ‘everyone being taken to court’, almost no one is being taken to court. When you look at that in conjunction with the fact the Environment Department is quite opaque in its decision-making generally, 32 decisions being challenged over a decade is pitiful,” said Annika.

All administrative decisions made under the EPBC Act are subject to judicial review by the Federal Court, a process whereby a person aggrieved by a decision made by a government official can have that decision scrutinised by an independent reviewer.

This process has also been incorrectly associated with ‘lawfare’ claims, according to the GreenLaw study.

“I think there’s been a real misunderstanding about what judicial review is about. A lot of business groups and commentators say, ‘ultimately the proponent goes ahead – clearly these cases aren’t having the impact that they want.’ But the role of judicial review is to make sure the Minister acts according to law and not in a corrupt fashion,” said Andrew.

“Business lobby groups are on the record publicly saying there are so many cases and that environmental NGOs are stopping us from developing our projects, shutting down Australian jobs. In actual fact, it’s only a very small number of cases and in those cases they are actually succeeding at or above the rate of general judicial challenges.

“Actually, the environmental NGOs are more successful than the average judicial review challenge which, in our view, shuts down the argument that they are not bringing substantive legal issues,” he noted.

The GreenLaw study has generated media coverage and follows the June release of a once-in-a-decade Interim Report into the EBPC Act in which Professor Graeme Samuel AC found it “ineffective,” “complex” and “costly”.

In its submission to this review, GreenLaw emphasised the importance of upholding standing provisions in light of their peer-reviewed research that debunked the impact of environmental ‘lawfare’ allegations.

The group called for extending the provisions to “increas[e] public trust through involvement in decision-making processes, information transparency and in the development of National Environmental Standards; rather than removing or weakening standing provisions that serve to increase government accountability”.

“Broadly what we see is there is a clear failure in the decision-making that’s being taken and the legal obligations are not being complied with, yet those decisions aren’t being challenged at high rates and that’s probably because of the prohibitive cost of lodging cases. At the same time, the Government is running with this narrative that we need to cut ‘green tape’ to stimulate jobs,” said Andrew.

“However, if we wind back these standing provisions, we’re actually not going to generate any more jobs because very few projects are being challenged under the Act. The narrative should be that there are a lot of mistakes being made that aren’t be captured in judicial review because the ability to bring a case is quite hard practically.”

The GreenLaw study highlights the “important, positive role” that public interest litigation plays in ensuring our environmental decision-makers are accountable and their decision-making is “being done in the best interests of the Australian public today and tomorrow”, said Annika.

“Although it wasn’t linked to any ANU College of Law coursework, the enthusiasm of the staff really showed that the community at ANU goes beyond the classroom. There was a sense that, if we were driven enough to be seeking out these research questions and doing this work together, we were going to get the support we needed to achieve it. That has led to a fantastic outcome that we can all say has enriched our experience at ANU,” she said.

Learn more about GreenLaw including how you get involved here.