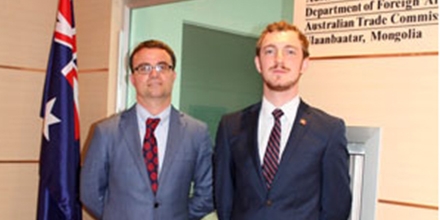 The New Colombo Plan’s first Mongolia Fellow – Mark Pennini from the ANU College of Law – has arrived in Ulaanbaatar.

Mark is at the National University of Mongolia undertaking field research for his Honours Thesis on Mongolian women judges and will shortly take up an internship with the Judicial General Council of Mongolia. He is also hoping to undertake an internship at Max Group, one of Mongolia’s largest corporate entities operating across the retail, manufacturing, agriculture, mining and construction sectors.

Mark was welcomed to Mongolia by Australia’s Consul-General and Trade Commissioner, Mr Brendan Coyne, and met staff at the Australian Consulate-General in Ulaanbaatar. He has also had the opportunity to attend a networking breakfast hosted by the Australian Chamber of Commerce (AustCham) in Mongolia where he met with leading Australian businesspeople including representatives from the legal, human resources, financial and mining industries.

Mark said of his first few weeks in-country as an NCP Fellow: “I am delighted to be back in Ulaanbaatar, Mongolia, my second home. I’ve received such a warm welcome from my friends, colleagues and everyone at the Australian Consulate-General here. With the support of the New Colombo Plan, I’ve already been able to make many new contacts, secure valuable internships, and launch my research with the confidence that I can make an original academic contribution to Mongolian studies.”

Professor Kim Rubenstein is supervising Mark Pennini's Honours law thesis which relates well to her own ARC grant project on Trailblazing Women and the Law. Prof Rubenstein met with Mark before his departure to Mongolia and now meets regularly with him via Skype and she is delighted with his progress.