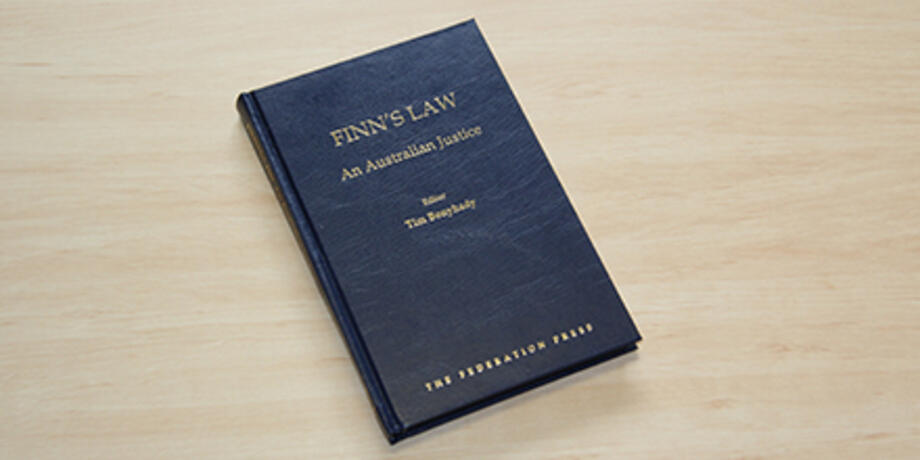 Native title presented perhaps the ultimate, quintessential opportunity for someone committed, as both an academic and a judge, to the Australianisation of Australian law. Paul embraced this challenge in a striking fashion in 2010 in Akiba

The Hon. former Justice Paul Finn is one of the great figures of the ANU, and the ANU College of Law, where he taught for a decade before becoming head of the Law Department in the University’s Research School of Social Sciences and then a justice of the Federal Court of Australia. In 2016, his work was celebrated – and analysed and critiqued – at a conference in Canberra organized by Professor Tim Bonyhady of the ANU College of Law. The consequent book, Finn’s Law: An Australian Justice, edited by Professor Bonyhady and published by Federation Press in Sydney, has now been published.

Federation Press has also republished former Justice Finn’s most renowned book, his Fiduciary Obligations of 1977, together with two of his major essays on fiduciary obligations, and an introductory essay by Sir Anthony Maston, the former Chief Justice of the High Court of Australia. While the term ‘classic’ is sometimes applied relatively loosely, it is a true mark of a ‘classic’ book that it should reappear long after its initial publication. The 40th Anniversary Republication of Finn’s Fiduciary Obligations is such an instance.

“Paul is renowned for good reason for his first book [which is] based on his Cambridge doctorate,” writes Professor Bonyhady in the introduction to Finn’s Law.

“In 1977, Fiduciary Obligations created, as much as defined, a field across many jurisdictions and is now being reprinted almost 40 years after its initial publication. Yet even as [it] first appeared with immense impact on private law, Paul was making a mark in public law with articles on misconduct and the liability of public officials, drawing on research done during his first year at Cambridge when he was looking to apply the fiduciary concept to the public domain.”

While often thought of as an equity lawyer, former Justice Finn’s influence on other areas of private law and public law has been profound.

As a member of the Federal Court, Professor Bonyhady writes, former Justice Finn delivered an array of landmark decisions.

“One of the first, in 1997, was Hughes Aircraft, where he transformed the framework for tendering within Australia’s public sector,” he writes.

“Native title presented perhaps the ultimate, quintessential opportunity for someone committed, as both an academic and a judge, to the Australianisation of Australian law. Paul embraced this challenge in a striking fashion in 2010 in Akiba, where he became the first judge to recognise commercial native title rights.”

In keeping with his career, half of the contributors to Finn’s Law are academics and the other half judges. The contributors from the bench include Justice of the High Court of Australia Stephen Gageler AC, one of his former students at the ANU; Federal Court Justice Michael Barker, one of his colleagues at the ANU; and Ross Cranston, a Justice of the Queen’s Bench Division in Great Britain, and another former colleague at the ANU. Associate Professor Pauline Ridge, another of his former students at the ANU, has written a chapter titled Participatory Liability and the Hallmarks of an ‘Australian Equity’.

Professor Bonyhady describes former Justice Finn as a “creature of the Australian National University”, where he “became an inspirational teacher who found great stimulus among his colleagues”.

“Paul was committed to contributing directly to Australian society: hence his work on integrity in government. But the school also spurred him to deepen his understanding of social and political theory, further enriching his writing.”

Finn’s Law: An Australian Justice and Fiduciary Obligations: 40th Anniversary Republication with Additional Essays will be launched together at the Federal Court of Australia on Thursday, 9 February.