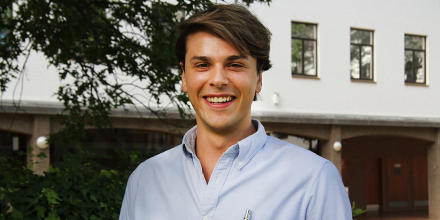 It’s a perfect combination of all of my interests and I think that’s really rare to find.

Succeeding over law graduates from across Australia, the 2016 graduate will join The Hague Conference at the end of January to work in the area of private international law.

Andreas was thrilled to receive the internship, which he said was a natural progression from the focus of his honours thesis, also private international law.
“It’s obviously a really fantastic opportunity and I feel very privileged to be the one who was chosen to go,” he said.

“This opportunity combines many of my interests. Not only law and private international law at that, but also diplomacy and international affairs which I’m very interested in."

“Also language. For my arts degree I majored in languages – French and Spanish – and the other working language of The Hague Conference is French, so I really hope to be able to use that on a daily basis and in a professional capacity.”

“It’s a perfect combination of all of my interests and I think that’s really rare to find.”

It wasn’t always clear that Andreas was headed for The Hague.

In high school he was more interested in science and even took the ANU Extension course in Chemistry with an eye to go into neurosciences.

But he also loved languages and diplomacy, and realising that led him to law.

“It perhaps took a little while for me to realise that arts, humanities, language, writing, those skills are my stronger suits and law is perfect for that,” he said.

When he took Conflict of Laws in his fourth year his focus really honed in on private international law.

“If anyone ever looks at my transcript they’ll see a complete change that year,” he said.

“It shows that hard work and interest can really combine to produce something amazing.”

Andreas has lined up a job at King & Wood Mallesons Australia when he completes the internship.

The internship is awarded each year in memory of the late Hon Dr Peter Nygh AM, a leading international lawyer, former judge of the Family Court of Australia and an Australian delegate to and rapporteur of The Hague Conference.