Empowerment through education: How Keny realised his migrant parents’ dream 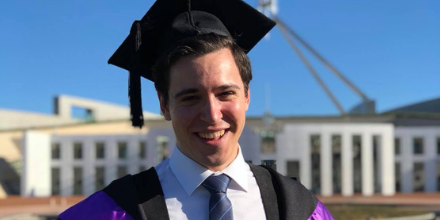 Keny is now working at KPMG after graduating from ANU in early 2021.

No matter our background, we should be grateful for those who have sacrificed so much in order for us to have the best chance in life.

Keny Arcangeli (BIntR/LLB (Hons) ‘21) comes from a family with a long history of travelling to foreign lands in search of greener pastures.

This family tradition dates back to the 1940s when Keny’s paternal grandfather fled from the Axis-aligned Italian regime to start a new life in France near the end of the Second World War.

Years later, Keny’s parents moved from France to Australia in search of better opportunities, not only for themselves, but for their future child.

“For them to move to Australia was no easy task financially, but also socially and culturally.

“Despite being far from their old home and families, they managed to settle and ended up having me a couple of years later.”

Keny attributes his success to his parents’ “bravery, vision and decisions” that convinced him the best learning experiences are outside one’s comfort zone.

“They wanted me to experience as many things as I could, which they weren’t able to growing up.”

For Keny, this not only meant a tertiary education, but competitive sport.

“Much to my parent’s regret, but mainly support, I ended up falling in love with swimming,” he said.

“This meant having to wake up at 4.30am Monday to Saturday for about 12 years.

“In addition to this, they also wanted me to make the most of the educational system in Australia and ensured that I did my best at school from an academic standpoint.”

Keny’s parents not only taught him French as a child, but taught themselves advanced maths, English and history to ensure he stayed on top of his studies.

“My parents didn’t have the same opportunities nor education that I was so fortunately provided,” Keny said.

“This meant that they had to teach themselves a lot of the academic material that I was covering in early high school in order to assist me with my homework.

“It was thanks to their encouragement and support that I was able to be accepted into Brisbane Grammar School.” 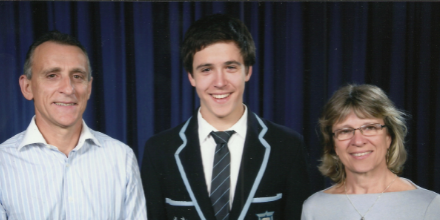 Keny and his parents at his high school graduation.

After graduating high school, Keny started studying a Bachelor of International Relations at the University of Queensland.

During this time he travelled around Australia for various Model United Nations and debating tournaments.

“A couple of those tournaments were based in Canberra and I immediately fell in love with the city,” Keny said.

Keny’s love for the nation’s capital was one of the key drivers behind his decision to transfer to ANU in 2016, enrolling in a Bachelor of International Relations/Laws (Hons).

“It’s incredibly central to the things I’m interested in, which includes Parliament House, the High Court and federal departments,” he noted.

Keny was also drawn by the prospect of studying at Australia’s national law school.

“The ANU College of Law has an excellent reputation for undergraduate studies and provides a vast array of electives that I was particularly invested in. Namely, the breadth of international law courses that were on offer,” Keny said.

“When I transferred to ANU, I intended to continue my Bachelor of International Relations, but also to get into the Bachelor of Laws (Honours) program.”

After receiving the required grades, Keny got his wish and was accepted into the program.

Keny’s parents continued to support his studies throughout his academic journey, from studying international relations at the University of Queensland to graduating with a double degree from ANU.

“At University, my parents took a different approach,” Keny said.

“My Dad, in particular, liked to debate with me sometimes on the material that I was learning or the topic of my essays.

“These debates would allow me to develop a better understanding and knowledge of the material, thus aiding me in identifying what I could improve on.”

Unlocking a passion for law

However, being cities apart often meant that their support came to Keny in the form of weekly text messages.

“They would send me texts reminding me of the reasons why I’m at university, how I was making our family proud, and making sure I wasn’t spending too much time working, going out or procrastinating with my friends,” he said.

During his time at ANU, Keny was heavily involved in university life.

“I was fortunate enough to be a part of the leadership team at Griffin Hall for over four years,” Keny said.

“I also made the most of the events put on by the ANU Law Students’ Society and ANU College of Law, such as mooting competitions, career nights and of course, the balls.” 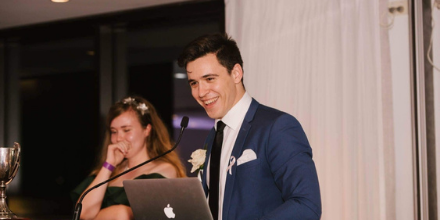 However, some of Keny’s most memorable experiences at the ANU College of Law were the practical assessment pieces.

“I recall working with classmates to develop an app in litigation and dispute management, partaking in a moot for evidence and being an arbitrator, judge and prosecutor in international dispute resolution,” he said.

“These all stood out to me as they gave us a taste of what happens in the legal profession after our studies.”

Evidence (LAWS 2207) with Associate Professor Anthony Hopkins was one of Keny’s favourite courses at ANU Law.

“Anthony was not only a fantastic lecturer, but I was also fortunate enough to be in his tutorials for our moots,” Keny said.

“He not only drew upon his experiences in his career as a criminal defence lawyer and barrister to help us understand the principles, but also added a touch of personality to the class which made it incredibly enjoyable.

“He always took the time to clarify the content and his passion and enthusiasm would make you want to do your best.”

“I found it particularly fascinating and topical given the challenges and threats Australia has seen recently,” he said.

Keny graduated from ANU after the summer course period of 2021.

Reflecting upon his time at law school, Keny is grateful to his lecturers for preparing him for what lies ahead.

“Many of my lecturers have sought to not only shed light on the realities of what the professional workforce will look like, but also how to best navigate it to your advantage,” Keny said.

“At university, it’s very easy for one to become starry-eyed and optimistic about how an industry operates.

“Thanks to many of my lecturers, they’ve been able to ensure that I kept my optimism, but also set realistic expectations of what it will be like.”

Keny has recently started working at KPMG as part of their university graduate program.

“I assist at a junior level with delivering projects to our various clients,” Keny said.

“The Canberra office works a lot with the Federal Government and its departments, which plays perfectly into my own personal interests and passions.

“My LLB has expanded my problem-solving skills, taught me the value of research, as well seeking diverse opinions on matters, all of which are vital within the consultancy industry.”

But as he enters the next stage of his professional life, Keny hasn’t forgotten his roots.

“I realise that my story is far from unique, and I know for a fact that others and their families have overcome more,’ he said.

“I think my story has allowed me to recognise this and understand that no matter our background, we should be grateful for those who have sacrificed so much in order for us to have the best chance in life.”

Find out more about the ANU Bachelor of Laws (Honours) program here.