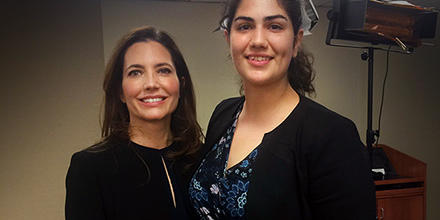 ANU College of Law student Caitlin Figueiredo and US Assistant Secretary of State for Educational and Cultural Affairs, Evan Ryan

Invited to the summit by Michelle Obama for her global work on gender equality as a Strategic Advisor to both the UN and UN Women, Caitlin was “stoked” to discover she had been nominated by the White House as a Changemaker.

Changemaker is a very apt term for the young Canberran who, in a few short years, has made her mark as a champion for women’s equality and youth representation.

Today Caitlin met with the US Assistant Secretary of State for Educational and Cultural Affairs, Evan Ryan, in Washington to get the United States on board with the United Nations World Merit gender equality plan that she will be launching with the UN Secretary-General Ban Ki-Moon in New York this September.

“While I’m in Washington, I’m also taking the opportunity to meet with a range of other people with the aim of getting partners to back the plan, including the US Fulbright scholars scheme, and I’ll also be working to connect other organisations together,” Caitlin said.

“The plan - which is part of World Merit’s flagship program Merit360 - is a holistic empowerment model of gender equality. While some models of gender equality leave out important things like financial support and educational support, the model we are proposing includes all the key building blocks like health, education, violence against women, and civic engagement.

“The plain aims to use mentors across different services and sources for young women who are unable to find the support and help they need for their own empowerment.

“We are going to create a tree model where a person mentors three young people and they go on to mentor three more people. Our hope is to see 200,000 young girls and women empowered by 2018.”

In her second year of a flexible double degree in Law and International Development, Caitlin said her UN roles came about after doing some work last year promoting the UN’s Sustainable Development Goals.

“I met with a number of politicians and leaders and they asked if I would represent Australia at the UN’s Youth Assembly. So I did and after I gave a speech at the UN, I was asked if I would become a strategic advisor to the UN and UN Women,” she said.

While the work she is doing with the United Nations might deliver the most profound changes for women across the globe, Caitlin has also been working at the community level with women in Pakistan.

She is in the midst of building a school in Pakistan where, working with Francis Ventura and his Peshawar School for Peace, she already has a successful program up and running to empower women and help them transition into education.

Caitlin is also State Director of Vgen, World Vision’s youth arm in the ACT, and an Australian Global Ambassador for the social impact campaign Global Resolutions Initiative where she has been actively campaigning for the delivery of the United Nation’s Sustainable Development Goals.