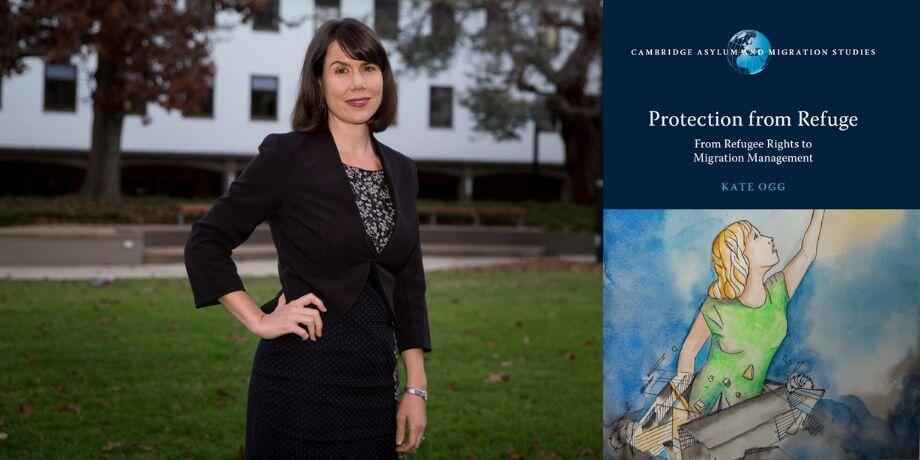 Associate Professor Kate Ogg's interest in courts’ roles in determining refugees’ access to places of sanctuary began with her examinations of forced encampment litigation in Kenya.

My research shows that refugee law is developing in an asymmetrical fashion by widening the categories of people entitled to international protection, but diminishing the protection to which they are entitled

The places in which refugees seek sanctuary are often as dangerous and bleak as the conditions they fled. In response, many continue to travel within and across borders in search of safety. As part of these journeys, refugees are increasingly turning to courts to ask for protection, not from persecution in their homeland, but from a place of 'refuge'.

Protection from Refuge: From Refugee Rights to Migration Management (Cambridge University Press, 2022) by Associate Professor Kate Ogg is the first global and comparative study of 'protection-from-refuge' litigation, examining whether courts facilitate or hamper refugee journeys with a particular focus on gender.

Drawing on jurisprudence from Africa, Europe, North America and Oceania, Dr Ogg shows that courts have transitioned from adopting robust ideas of refuge to rudimentary ones. This trajectory indicates that courts can play a powerful role in creating more just and equitable refugee protection policies, but have, ultimately, compounded the difficulties inherent in finding sanctuary, perpetuated global inequities in refugee responsibility and rendered refuge elusive.

“While there are myriad studies of how courts interpret refugee definitions, I examine how judges approach the remedy: refuge,” she said.

“I provide an account of how adjudicative decision-makers conceptualise refuge through a variety of legal prisms and arbitrate the clash between the search for sanctuary and the different ways states constrain refugees’ mobility.”

An expert in refugee law, human rights, litigation, access to justice and feminist legal theory, Dr Ogg’s interest in courts’ roles in determining refugees’ access to places of sanctuary began with her examinations of forced encampment litigation in Kenya.

In 2012, the Kenyan government ordered all refugees in the country to relocate to refugee camps. This decision would have forced refugees who had rebuilt their lives and families in urban centres, such as Nairobi, to pack up and move to a camp on the outskirts of Kenya. A group of refugees based in Nairobi subsequently challenged the order in court and were successful at first instance and on appeal.

“The first instance and appeal judgments were fascinating and very rich. My view was that they were pushing international refugee law in new and important directions and were, in many respects, feminist judgments, despite no female refugees formally appearing as petitioners before the court in this initial case,” she said.

“The High Court of Kenya continued to hear forced encampment cases but no-one was taking any notice of these judgments. There was no in-depth scholarly analysis of these cases emerging.”

Almost a decade on, Dr Ogg is still the only refugee law scholar to have written about these cases in depth.

“There is now a growing recognition in the field that refugee law scholars have for too long ignored jurisprudence from lower- and middle-income countries. I am delighted that my research has been part of an emerging push to rectify this lacuna,” she said.

In her monograph, Dr Ogg broadened her study by examining similar cases brought by refugees in other parts of the world. Her analysis was informed by anthropological literature about ‘fragmented’ refugee journeys, which highlights how refugee journeys are ‘rarely linear’, rendering some groups especially vulnerable by being unable to travel onwards or return home.

“Refugees are increasingly coming to courts seeking orders that would enable them to continue their journeys. They may start a court case seeking an order to leave the confines of a refugee camp or permission to travel from an offshore processing centre (for example, in Nauru) to Australia. I wanted to know whether courts around the world were facilitating or hampering refugees’ ‘fragmented’ journeys through how they were deciding these cases,” she said.

“As a feminist scholar, I was particular interested in this question from a gender lens. Were women more likely to be successful in these claims? Were courts being sensitive to children’s particular protection needs? And what about refugees with disabilities?”

While people fleeing persecution and conflict have been granted asylum in foreign lands for thousands of years, the findings in Dr Ogg’s book are particularly timely. In 2021, the United Nations High Commissioner for Refugees (UNHCR) estimated 89.3 million people worldwide had been forcibly displaced, with 27.1 million of these people classified as refugees.

One of the greatest global dilemmas in refugee policy is the lack of equitable responsibility-sharing, which results in most of the world’s refugees being hosted by the countries least able to do so, according to Dr Ogg.

“UNHCR statistics indicate that there are now more displaced people than any time in human history. With these increasing numbers and states deploying more and more creative means to prevent refugees arriving on their shores as well as to send them elsewhere, the role of courts in adjudicating refugee journeys, such as whether or not a refugee can cross a border or can resist removal to another state, will not abate,” said Dr Ogg.

Since 2012, asylum seekers arriving in Australia by boat without valid visas have been subject to ‘offshore’ or ‘third country’ processing either in the Republic of Nauru or on Manus Island, Papua New Guinea. Despite drawing condemnation nationally and internationally, Dr Ogg observes similar models have emerged in other parts of the world – notably, the United Kingdom’s plan to send refugees to Rwanda.

“While my research informs these contemporary legal and policy debates, I think it is important to remember that when and why a community will give protection to a person fleeing danger and deprivation, and the scope and nature of protection given, are ancient and enduring questions,” she said.

“My research shows that refugee law is developing in an asymmetrical fashion by widening the categories of people entitled to international protection, but diminishing the protection to which they are entitled. This is a trajectory that must be addressed. That decision-makers have shifted from broad and comprehensive to minimalist understandings of refuge suggests that courts and other adjudicative bodies are becoming less inclined to counter states’ positions on appropriate standards of refugee protection.

“What has occurred through this transition is the loss of a powerful conflicting vision or alternative narrative on how a state or the international community should respond to those who come in search of sanctuary.”

Dr Ogg is currently working on an Australian Research Council Discovery project with Professor Susan Kneebone (University of Melbourne) and Dr Anthea Vogl (University of Technology Sydney). It is the first comprehensive study of Australia’s community or ‘private’ refugee sponsorship schemes with comparisons to Canada, New Zealand, the UK and Ireland.

Purchase your copy of Protection from Refuge: From Refugee Rights to Migration Management here.