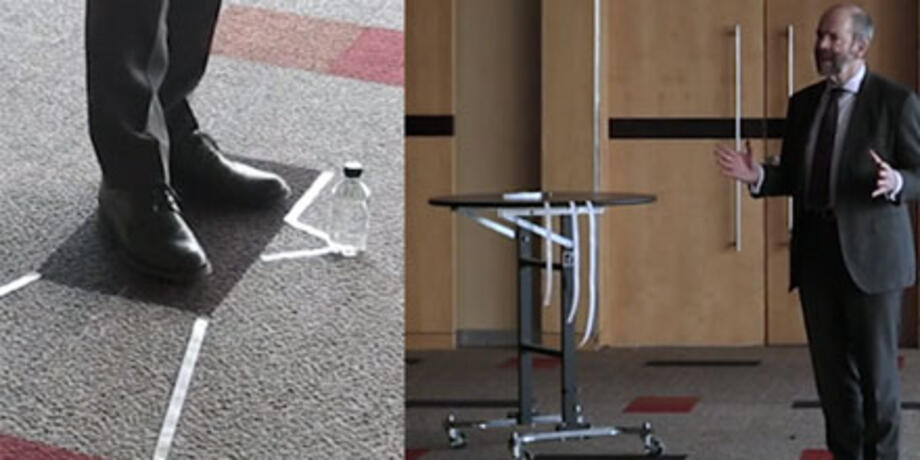 While we quite rightly think about traditional publication outlets, there are other non-traditional outlets which can in fact reach new and quite significant audiences and make our work accessible in ways that we might never have imagined.

Professor Donald Rothwell’s expertise about the international law of the sea has featured in the 2018 Venice Biennale – one of the world’s most important arts festivals.

Linke contacted him in 2016 and sent a film production crew to record his presentation on the sidelines of a meeting in Johannesburg of the International Law Association.

Professor Rothwell’s interview was bookended by fellow academics Professor Davor Vidas of Norway and Professor David Freestone of Washington, who were all in South Africa to work on a report about baselines under the international law of the sea.

The video marked the first time Professor Rothwell has used sticky tape and a water bottle to explain maritime boundaries.

“This was the interesting thing about it,” he recalls.

“[The filmmakers] wanted different ways of explaining legal concepts to a non-legal audience. When they approached me, they said ‘these are the ideas, do you think they will work?’

“I said yes and we went to work in this large, empty conference room space.

“I was able to draw on my experience of teaching, how I sometimes use the opportunity to illustrate law of the sea concepts when the teaching space permits.”

“If we envisage this bottle to be an island, then the coastal state might say ‘we wish to draw some baselines that connect the island up to the coast line,” he says in the video.

The exhibition, which ended in September, was shown in the Institute of Marine Science of the National Research Council of Italy. It was commissioned and produced by the TBA21 Academy, an organisation that unites artists, scientists and other experts to work on collaborations to better understand oceans.

Professor Rothwell says the project brought together a series of people from across the world with oceans and oceans governance expertise, whose commonalities are drawn out in their video recordings.

“These are not the perspectives of one individual scholar, or of European scholars for example, but reflect the fundamental framework of the international law of the sea,” he says.

Reflecting on the experience, Professor Rothwell says, in the current climate, academics need to be open to different ways of making their work more accessible.

“While we quite rightly think about traditional publication outlets, there are other non-traditional outlets which can in fact reach new and quite significant audiences and make our work accessible in ways that we might never have imagined.”

Professor Rothwell was recently contacted by an Italian artist who is exploring the law in the Arctic as it relates to ice. Discussions are at the preliminary stage.