Disaster recovery and mass relocation: how to predict legal roadblocks 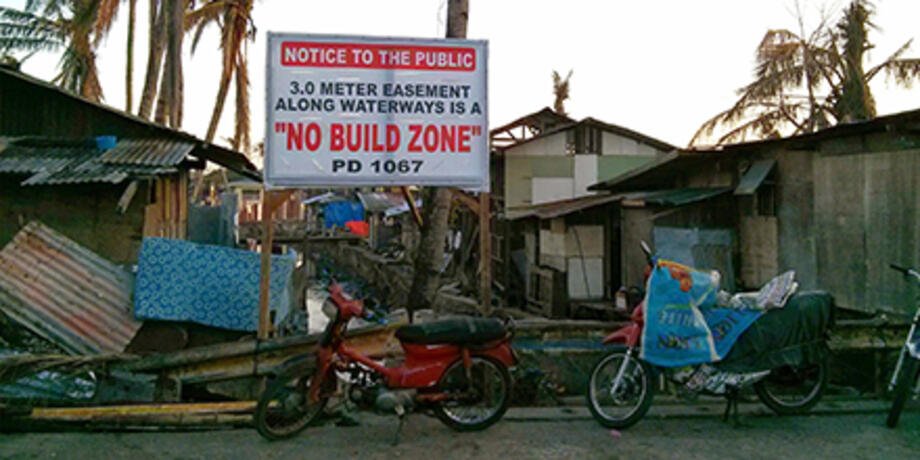 Tacloban City's survivors of Typhoon Haiyan must relocate after parts of the city are declared No Build Zones. Photo by Caroline Compton

When people were reaching into their pockets to make donations, they were reacting to images of particular families. The individuals that triggered the giving that enabled the intervention are the ones who have missed out.

Earthquakes, typhoons, tsunamis, hurricanes. Globalised media has made us aware of how often major natural disasters occur, but do we really understand the impact they have on communities?

We understand when people are killed, lost, maimed and orphaned. Those are the clickable tragedies that make us reach into our pockets and donate a few dollars to an international aid agency.

It’s the stories that unfold in the aftermath that we don’t understand. The completely predictable disasters that occur when the world’s attention has moved on and the real clean up begins.

Typhoon Haiyan hit South East Asia in November 2013, devastating the Philippines. Also known as Super Typhoon Yolanda, it was the Philippines’ deadliest typhoon, killing more than 6000 people and displacing tens of thousands. The permanent relocation of 80,000 from Tacloban City, one of the worst hit communities, is a case study for ANU College of Law PhD candidate Caroline Compton (JD (Hons) '13, GDLP '16), who is researching the impact of law on disaster recovery and relocation.

Caroline’s thesis will examine the problems and successes that have arisen in relocating those hardest hit by the typhoon. The lessons learned will have the potential to improve mass relocation projects throughout the world as the effects of climate change become more widespread.

“There are consistently a very similar set of issues that will crop up,” she said.

“Available land after a disaster tends to be fairly marginal because the value of land skyrockets; when doing a large scale relocation you absolutely destroy social capital; there tends to be no livelihoods available in the new relocation area; and building infrastructure is incredibly expensive.

The politics of disaster recovery

Part of the issue Caroline’s research delves into is how rule systems can shape and affect the delivery of humanitarian assistance. Because disaster recovery by the international community must come at the invitation of the state, they are often bound by state policies that can potentially have devastating implications for the displaced people. However, there is nothing necessary about this process.

“The international community can choose to articulate a narrative of being neutral or apolitical and therefore comply with state plans, or they can articulate a human rights based rule narrative,” she said.

“They can tap into different rule structures to legitimate different tasks they chose to prioritise.  Compliance with any particular narrative may lead to a subjugation or an ignoring of the rights of the disaster victims, or they become secondary to some other objective.”

After receiving an Endeavour Postgraduate Scholarship Caroline spent 14 months in the Philippines watching the recovery and relocation efforts. As well as working at a fieldsite in Northern Cebu, she has been studying the plans to relocate 15,000 households in Tacloban City.

“Tacloban was the city that, when Typhoon Haiyan hit we saw a large number of images of distressed people,” she said.

“Because the plan to relocate Tacloban has been part of the agenda since the very beginning of the recovery, the government has actually requested is that the international community provide no assistance – nothing other than tents and first line emergency aid – to people living in designated danger areas, which are along the coast line.

“The consequence of that chain of decision making is that the most vulnerable people in the city – those families living directly on the shoreline on dangerous land – have the poorest quality accommodation until such time as the relocation site is developed and that potentially won’t be completed until the end of 2018. And even if it does get completed, questions about its location, the lack of utilities, livelihoods… Will people be willing to live there?”

Caroline said these families would face five to six typhoon seasons before they are moved.

“When people were reaching into their pockets to make donations, what they were reacting to were images of those particular families. The individuals that triggered the giving that enabled the intervention are the ones who have missed out.”

In pursuit of an answer

Caroline didn’t begin law school until she was 30, but by then her interest in South East Asia was already well established.

“I went to Vietnam on the Australian Youth Ambassador program then I stayed there for several years after my placement,” she said.

“My final job had been working with the International Organisation for Migration (IOM) on the return and rehabilitation program for trafficked women returning to southern Vietnam.

“I was really frustrated with this process because I realised I didn’t have the technical tools to remedy this problem – my skills were much more project management oriented. So I came to law school hoping to obtain a set of skills that would help me look at these large scale migration problems.

“We’re going to have this huge climate migration problem in the future so how are we actually going to be dealing with it?”

“About three weeks in I realised that if that was my intention I probably should have just done medicine because Australian law serves Australia and I wasn’t really looking to do international law. But I was lucky to have Professor Daniel Fitzpatrick for my contracts class and I went on to work with him as a research assistant for a couple of years and it was always with this view to how are we going to manage largescale movements of people as the climate changes.”

Bringing the research together

Now Caroline has travelled to Portugal to complete her thesis as a visiting researcher at the Centre for Social Studies at the University of Coimbra.

“Last year I was lucky enough to attend a summer school with the ALICE research project – a European Research Council Project – coordinated by the centre director Professor Boaventura de Sousa Santos,” she said.

“When I went to the summer school it was a wonderful experience and I made some great connections, so I’m going there for the next six to 12 months to write up my work with access to a group of people that specialise in this particular theoretical approach.”

According to its website the ALICE project "seeks to re-think and renovate socio-scientific knowledge by drawing upon “Epistemologies of the [global] South”, an approach proposed by Professor Santos.

"ALICE is grounded on a wager… that social, political and institutional change may largely benefit from the innovations occurring in countries and regions of the Global South."