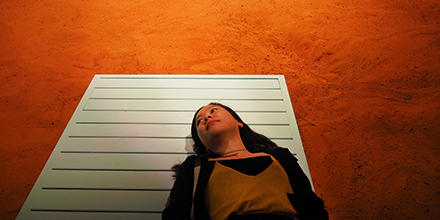 The true measure of the land is always absent in law and the best approximation is the map.

ANU Law PhD candidate Justine Poon has written a “Letter to the Land” for an artwork currently featuring in an exhibition at the Australian Centre for Contemporary Art (ACCA) in Melbourne.

Letters to the Land by Dutch art collaboration Bik Van der Pol, is part of the ACCA’s Greater Together exhibition. The exhibition explores questions of how to work better together in a context of social uncertainty and division – themes that are also at the core of the Centre for Law, Art and the Humanities, which Justine is a member of.

Inspired by a 1983 dust storm which blanketed Melbourne in red soil, the installation features a large gallery space filled with red dirt upon which seven daybeds have been placed. Each of the beds plays a sound recording of one of seven letters written by people chosen based loosely on the characters from the seven speeches about love in Plato’s Symposium.

Justine’s contribution has filled the role of the legal thinker Pausanias.

Exhibition curator Annika Kristensen invited Justine to take part in the installation after reading a piece she had written for New Philosopher. Using different media to communicate law and legal theory has long been an interest for Justine.

“It was a good opportunity to combine law with creativity, to collaborate with international artists and to get people to experience law in a different way,” she said.

In her letter she wrote about the relationships between law, land, and love and how mourning and haunting are acts of time travel that could reconfigure our responsibility to the many potential futures currently being threatened by climate change and political instability.

The recording of Justine’s letter is available online and the exhibition is open in Melbourne until 17 September.