From Canberra to Mexico City: How an Austrade internship broadened Yasmin’s career horizons 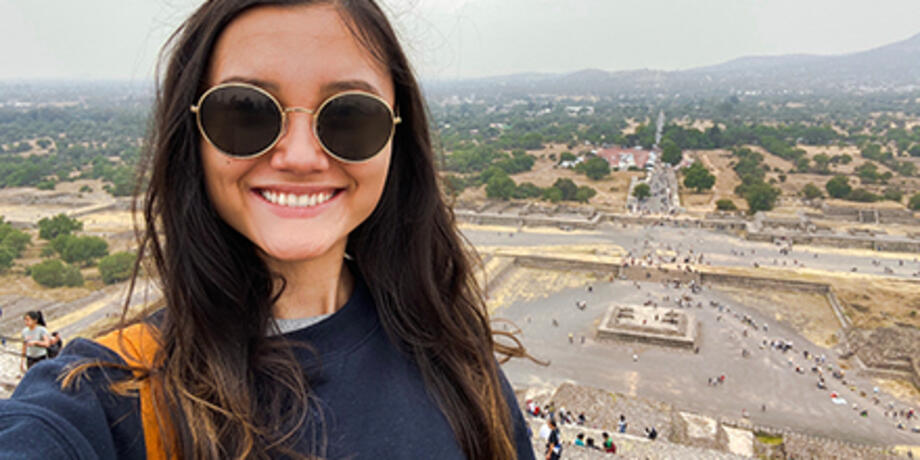 Bachelor of Laws/International Relations student Yasmin Poole at the site of the ancient Teotihuacán pyramids.

This internship taught me that you can still build an Australian career, but work internationally.

In 2018, Bachelor of Laws/International Relations student Yasmin Poole was a delegate of the Prime Minister’s Association of Southeast Asian Nations (ASEAN) Australia Special Summit. It was from this experience that Yasmin was able to network with Austrade leaders.

Finding overseas opportunities where she could practice Spanish was a motivating factor for Yasmin, who studies the language as part of her Flexible Double Degree at The Australian National University (ANU). With the assistance of her Austrade connections, Yasmin eventually secured a two-month internship at Austrade’s office in Mexico City that began in December 2019.

Coming from a low-income family in regional Victoria, Yasmin developed a strong sense of social justice at an early age. She received two accolades in September 2019: The Australian Financial Review 100 Women of Influence and the 40 Under 40 Most Influential Asian-Australians. She was also recently awarded the 2020 ANU Student Volunteer of the Year (Undergraduate) for her valuable contribution to society as a prominent advocate for youth issues.

Yasmin was based in the Polanco neighbourhood of Mexico City throughout her internship. Her days consisted of team meetings, graphic design and video production.

“I love creative work, and my boss was really supportive of my idea to create short ‘trade snapshot’ videos on LinkedIn, which ended up generating record-breaking engagement,” she says, adding Austrade’s Latin American offices have continued creating LinkedIn videos.

The Austrade Mexico office is the largest Austrade office in Latin America, with a focus on assisting Australian businesses to expand into the Mexican market. The team primarily focuses on mining, food and agriculture, defence and aerospace, and education.

Typical work includes connecting Australian businesses with relevant Mexican contacts, providing research briefs about Mexico’s industries, including an overview about key legislation and other regulations, alongside building business connections for Australia at trade events across the region.

“I learnt a lot about working in an international team and using cultural strengths. I also learnt what a career in trade looks like, and how Australia is in a fantastic position globally to expand its markets,” said Yasmin.

Being in a different country and outside your “cultural comfort zone” can be daunting. And while Yasmine admits the language barrier at the start was imposing, with time and the help of hospitable locals she grew to thrive in her new environment.

“There was so much that I learned about Mexico that I would have never known before. I can truly say that it is a beautiful country and I would highly recommend anyone to visit,” says Yasmin.

Tutors would regularly visit Yasmin at the Australian Embassy to further advance her Spanish. Coupled with daily interactions, her language skills improved significantly.

When Yasmin wasn’t working or studying, she was exploring the beauty of Mexico City. “The bright and vibrant neighbourhood of Coyoacán was my favourite,” she says, referring to the home of renowned Mexican painter Frida Kahlo. 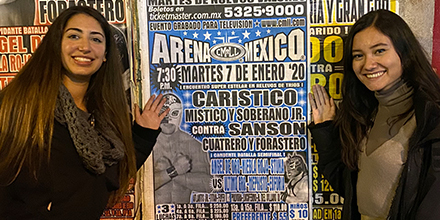 Yasmin (right) with an Austrade colleague at a Lucha Libre wrestling match.

Yasmin attended the internship over the summer break and even attended a Christmas party at the Australian Ambassador’s home, where Mexican and Australian employees came together and shared their cultures.

“We danced to classic English and Spanish songs, from the ‘YMCA’ to the ‘Macarena’. It made me realise that while Australians and Mexicans are geographically different, culturally we are quite similar – outgoing and fun,” says Yasmin.

Reflecting on her experience, Yasmin says she was “blown away” by how expansive Australia’s work is overseas and came to realise that you can build an Australian career while working internationally.

“It made me go outside my comfort zone and learn how to live outside of Australia. This experience has expanded my thinking about what I want to do upon graduation.”

Her advice to students interested in applying for overseas internships is to consider destinations you might not ordinarily, tap into your strengths and present how you bring value.

“I arrived in Mexico knowing very little about it. When I left, I not only had a greater understanding of the country but a deep appreciation for it too.”

Financial support and insurance are available to pursue these internships and exchanges. If you require funding, apply for the ANU College of Law Discretionary Student Financial Support.