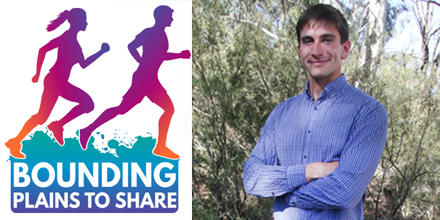 Bounding across our plains to share. Two young distance runners, ANU Law student Jackson Bursill and Canberran Cassie Cohen are planning to run approximately 4,000kms from Cooktown (QLD) to Footscray in Melbourne (VIC) this November, with the goal of bringing some humanity back into the conversation about Australia's immigration policies.

Rather than focusing on the enormous physical challenge ahead of them, Jackson Bursill (23) and Cassie Cohen (22) are intent on using their expedition as a vehicle to showcase stories of incredible people who have overcome tremendous adversity to begin a new life in Australia as a refugee. The overwhelming challenge is expected to take the pair over three months to complete. Each day of the trip will be dedicated to telling the story of a person who arrived in Australia as a refugee or an asylum seeker. The stories will feature a diverse mix of interesting people, ranging from high profile sports stars and businesspeople to local community heroes.
The journey will largely focus on starting conversations with locals as the runners pass through rural and metropolitan regions. The campaign will also target online audiences, as the individual stories will be posted on social media, as well as on www.boundingplainstoshare.com
Locals are strongly encouraged to show their support by joining Jackson and Cassie, whether that be anywhere from a 1 kilometre effort to a 500
kilometre stint. The entire route will be published on the website in advance and there will be a live tracking map, allowing each community to rally behind the advocacy effort.
“We’d love to see local communities getting behind the cause and showing their support for refugees by coming out to run with us along the way” said Cassie. “If you want to meet interesting people, you’ve got to do interesting things. We can’t wait to get into some great conversations with the Australian people, and we hope that’ll give us some momentum to get all the way to the ASRC in Melbourne!”

The pair will also encourage donations to the Asylum Seekers Resource Centre in Footscray, Victoria, which will serve as the finish line for the run. The starting point, Cooktown, is the location where Captain James Cook and Joseph Banks went ashore to survey the damaged Endeavour. As well as being the first contact with Indigenous Australians, Cook arrived ashore seeking refuge and asylum from the reef. The location is symbolic of Australia’s first boat people, it’s a reminder that the ancestors of all non-indigenous Australians came to this country for reasons not all that dissimilar to those that cause current day asylum seekers to flee their country.

In preparation for the gruelling journey, the runners are currently seeking community support across a number of areas. In particular, they are looking to assemble a team of media-skilled volunteers to help research, interview and write up as many local refugee stories as possible.
They are also looking for competent driving volunteers to drive the support vehicle and camper trailer in between towns along the way. Any financial or in-kind sponsorship including offers of accommodation, sourcing shoes, gear and food would also be greatly appreciated.

Jackson Bursill is no stranger to completing and organising major endurance events for social good. As a Youth Ambassador for the Australian Himalayan Foundation (AHF), he launched the NEVEREST Challenge in response to the devastating earthquakes that struck Nepal in 2015. NEVEREST is a fundraising challenge to climb the equivalent vertical height of Mt Everest by completing numerous laps of the same hill. Now an annual event, the NEVEREST Challenge has raised over $120,000 for the AHF, and is held in Canberra, Sydney and Melbourne.

Jackson was also an elite cross-country skier who represented Australia at various competitions, including the Nordic Ski World Championships in Sweden in 2015. He will finish his Law and Commerce degree at the Australian National University in Canberra prior to commencing the run. A passionate advocate for the power of language and rhetoric, he’s excited to push his physical limits but also to use the platform to challenge the way people think and talk about asylum seekers. He’s excited to meet Australians and asylum seekers along the run and looks forward to listening to and sharing their stories and experiences with other Australians.

Cassie Cohen is also involved in the NEVEREST Challenge, having co-led the event’s expansion to Melbourne in 2016. She has since become more involved with the AHF, and travelled to Nepal for three months over the 2016/17 summer to volunteer with the NGO’s flagship Teacher Training & Quality Education Program. Whilst in Nepal, Cassie also completed an internship with the Australian Embassy in Kathmandu and trekked the Annapurna Circuit for three weeks. Cassie is a keen long-distance runner, and has run the Oxfam Trailwalker 100km event twice, along with many other endurance challenges. She also coached distance runners at the Melbourne University Athletics Club and at RMIT.

Having graduated from RMIT University with a Bachelor of Professional Communication in 2016, Cassie now works full-time in Canberra. She is passionate about human rights and social justice causes, and is excited to be part of this effort to bring humanity back into the conversation about Australia’s immigration policies.