Home » Battling 'The Rip': crossing Port Phillip Bay at its most treacherous point

Battling 'The Rip': crossing Port Phillip Bay at its most treacherous point 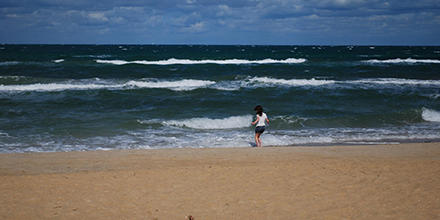 Several hundred lives have been lost in The Rip's turbulent waters.

The Rip is the 3.2 kilometre-wide body of water between Point Nepean and Point Lonsdale in Victoria, said to be the most treacherous stretch of ocean in Australia. The Rip connects Bass Strait and Port Phillip Bay, and is the entrance for shipping into Melbourne.

Port Phillip Bay is an area of 1930 square kilometres and the tidal range in the bay is governed by the water flowing in and out through The Rip from Bass Strait. Tidal flows run at up to 15km/h through a relatively narrow channel between reefs and across a rock shelf. Since 1840, The Rip has claimed 30 ships and badly damaged many others. Several hundred lives have been lost in its turbulent waters.

I was once an army cadet at the Officer Cadet School, Portsea, and we were all aware of the tragedy that happened at The Rip in 1960. Seventy-four commandos from 2 Commando Company left Point Lonsdale at 6pm on February 17 to cross The Rip in an exercise raid on the Portsea officer school. Shortly after departing, a strong tide caught the raiding party and pushed them out to sea through The Rip, where 10-metre waves capsized many of the kayaks and amphibious vehicles. Many of the men were picked up by larger rescue boats, only to be overturned once again in the heavy seas. Warrant Officer George Drakopolous and the driver of his amphibious DUKW, Private Eddie Meyer, both drowned as their vehicle sank. Eight of the commandos were rescued in Bass Strait after being picked up by an Italian ship, the Toscana. Commando Roger Wood helped others board the Toscana safely but was washed off a rope ladder by a monster wave and into the sea. His body was never found.

It remains one of Australia's least-known peacetime military tragedies.

Why, then, would anyone want to swim from Point Nepean to Point Lonsdale? The Rip has strong and unpredictable tidal movements, fickle weather, cold water, big waves, heavy swells, ocean-going ships, eddies and whirlpools, and sharks – all potential hazards for swimmers. But for a keen swimmer, crossing The Rip is the ultimate challenge.

Douglas Mew was the first person to swim it, on June 13, 1971. He completed the swim without a cage in 61 minutes. This achievement is commemorated by a plaque on the Point Lonsdale side. Since then, until 2014, about 70 swimmers succeeded in crossing.

Part of the reason for the low number of Rip swims was the lack of any approved organisation that could help would-be swimmers.

Swimmer and coach Grant Siedle founded Rip Swim in October 2014 to make it easier for swimmers to take on the challenge. Rip Swim makes all the arrangements but requires potential Rip swimmers to prepare properly by training for several months as a member of a team, with up to 10 swimmers in a team.

The Rip swim is normally not a race, but Siedle has run a competitive race across The Rip and intends to do so again.

The organisation takes a personal interest in the progress and safety of every would-be Rip swimmer. Kayaks even accompany training swims in Port Phillip Bay.

Swimming The Rip was on my bucket list, so I put my name down about five months ago for the February 26 swim, and began swimming at least one kilometre a day in preparation.

On the day, Rip Swim makes all the necessary administrative and safety arrangements, and coordinates the swim around shipping movements. Swimmers meet up and are briefed at Queenscliff harbour at 7.30am, then boats take the teams to the start point at Point Nepean. From there, the boats accompany the teams during the swim to Point Lonsdale. A kayaker also accompanies each team. A doctor is on-board one of the boats with a defibrillator, oxygen and first-aid equipment. If sharks are seen, all swimmers must leave the water.

Rip Swim tries to select an optimum slack tide period for swimmers – but slack tide at The Rip can be as short as five minutes. Rip Swim's experience and local knowledge in picking the right swim time for the crossing is critical for swimmer safety and team success.

The six-person team I was part of was called "Eugene's Rippers". When we reached the start point at Point Nepean, we all looked at the distant lighthouse at Point Lonsdale and the rough sea with some trepidation.

Once we got under way, we stayed together as a team, which helped maintain our confidence. Siedle told us to savour the moment when we reached the mid-way point. However, as we corkscrewed up and down large rolling waves 1.6km from the nearest dry land, I admit I was rather more focused on survival.

The last section of the swim into Point Lonsdale beach is often a diagonal contest with a strong current. A good swimmer might swim at 4km/h against a current but would soon become exhausted. In 2000, a group of very experienced swimmers ended up almost a kilometre into Bass Strait.

During the latter stages, we ended up a little outside "The Heads" due to an unusually protracted outgoing tide but were able to swim back with a turning tide to reach our landing point. The crossing time is usually 75 to 90 minutes, but can take up to three hours. We completed our circuitous 4.6-kilometre swim in 86 minutes – meaning we swam at a speed of 3.2km/h.

Up until today, 236 swimmers have swum across The Rip. This compares with 1731 crossings of the English Channel while, by contrast, the relatively less-challenging Mount Everest has been conquered more than 4000 times!

It costs $495 to swim with Rip Swim, but much of that would have been spent on safety measures. From my point of view, it was money well spent!

This article was first published in Fairfax Media on 25 March, 2017.