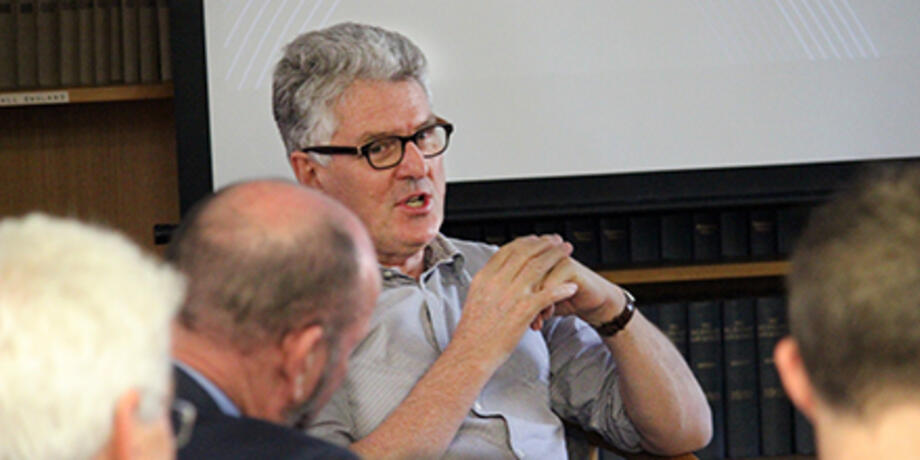 The unexamined demon has such power – that’s why I think we mustn’t be squeamish about it and it will be extremely difficult but we’ll be better for it.

Australia needs to have a ‘difficult’ conversation about the effect of race in its politics, says writer and journalist David Marr, who spoke at the ANU College of Law this week about his new Quarterly Essay.

The White Queen: One Nation and the Politics of Race, which shows that One Nation voters are different to how they are usually portrayed in the media, relies heavily on the Australian Election Study, led by Professor Ian McAllister at the ANU.

Marr’s essay demonstrates that One Nation voters are almost exclusively born in Australia, identify predominantly as working class, but have not been left without jobs as a result of globalisation. More One Nation voters live in cities than in the bush and they are rarely university educated. Over 80 per cent of One Nation voters want to see immigration levels cut.

Marr said that ‘the commentary and the reality don’t completely square’.

He said that One Nation voters are nostalgic for a White Australia. ‘And it’s not even clear what epoch they’re nostalgic for. It’s kind of their own childhood mixed up somehow with their parents’ married life.

‘There is this vague appeal to an Australian way of life where one thing was certain: Australia was white,’ he said.

Marr argued that the element of race in Australian politics, if left undiscussed, would continue to have great power.

‘I’m intrigued by the fact, that racism, that hostility to Aboriginal Australia, which is still very strong, is not exploited politically. Or is only exploited by absolute masters of the art of race politics.

‘We have given a kind of respectability to the fear of Islam that we have not conferred on distaste for Aboriginal Australia,’ he said.

‘I think we have to find a way of having [a conversation about race in politics], otherwise the situation is going to continue to be exploited by people who wish to distort the values of our national politics, rather than have out what this country really feels on questions of race.

‘The unexamined demon has such power – that’s why I think we mustn’t be squeamish about it and it will be extremely difficult but we’ll be better for it,’ he said.

Speaking to Woroni before his talk at the Phillipa Weeks Staff Library on Tuesday, Marr said he agreed that political journalism and political science should interact more often.

‘Over the water there is Parliament House and there’s a whole discourse going on in Parliament House about the nature of politics in Australia. Over here on the other side of the water, at the ANU, there’s an academic study of precisely the same questions and they’ve got the figures,’ Marr said.

Marr noted the ‘generosity’ of Professor Ian McAllister in providing and explaining the data from the Australian Election Study, and praised the other Australian academics who assisted with the essay.

Marr said that the solution to the ‘profound problems of Australian politics is to invest in education.’

He drew comparisons between the education levels of One Nation supporters and Donald Trump’s supporters in the US, while discrediting the view that Hanson is riding the same tide as populist right-wing movements internationally.

Hanson’s support base in Australia is often exaggerated, Marr said.

‘Hanson is used as a reason for stalling on progressive change, and if we go down, say, the equal marriage road, or if we address intelligently the problems of climate change or energy, there’s going to be this revolution from below and we’re going to be swept away by populist hordes who’ve come to despise elites.

Marr is an animated speaker, who leans out of his chair to make points more profound while repeating variations on clauses to ensure everyone in the room knows exactly what he means.

Speaking to Woroni, Marr said that, even after 40 years as a journalist, he was still intrigued about the nature of the so-called Australian way of life.

‘I’ve spent a professional lifetime looking at, analysing, describing the Australian way of life, in one way or another – mainly it’s political life, sometimes it’s artistic life, sometimes other things – but I’m as mystified and thrilled as ever about what it is. It is so diverse and perverse and hard to define but strong to feel, all at the same time,’ he said.

This article was pirst published in Woroni and is reprinted here with permission.