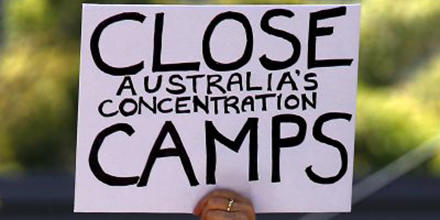 Aside from the fact that no legislation currently makes it illegal to travel by boat to Australia or to claim asylum after doing so, the wording of the Bill reveals the government’s intent to capture those taken to regional processing countries like Cambodia in the future.

The Bill prevents asylum seekers who arrive by boat and who are then taken to a regional processing country after 19 July 2013 from applying for any type of visa now or in the future. It is both retrospective and forward looking.

The government’s explanatory memorandum states that the Bill will only apply to asylum seekers and refugees currently on Manus Island or Nauru, or those who have since come from there to Australia for medical treatment. It excludes children who are taken to a regional processing country before they are 18 because children ‘may not be able to make decisions on their own behalf… to travel illegally to Australia by boat’.

Aside from the fact that no legislation currently makes it illegal to travel by boat to Australia or to claim asylum after doing so, the wording of the Bill reveals the government’s intent to capture those taken to regional processing countries like Cambodia in the future.

It is important to understand that the punitive restriction applies equally to both asylum seekers and refugees and impacts upon these people regardless of their future status.

Both the reaction of New Zealand Prime Minister John Key, when he stated that he would not support creating two classes of citizens, and Australia’s proposed ‘deal’ with the United States, highlights the very problem the Bill presents.

This is that once someone is recognised as a refugee there are only a few ways that they can cease be one. One of these ways is laid out in Article 1c (3) of the 1951 Refugee Convention, which provides that refugee status ends when a person who is a ‘recognised refugee’ has ‘acquired a new nationality and enjoys the protection of the country of his new nationality’.

Another is that once an asylum seeker returns to their country of origin they are no longer considered an asylum seeker. Yet the Bill extends a form of punishment upon both asylum seekers and refugees for events that happened when they were legally seeking protection under international law.

Under the proposal by the US and Australian governments to resettle refugees from Manus Island and Nauru in the United States, those refugees will eventually be able to apply to be naturalised. They will no longer be refugees and as citizens they can expect all the benefits allocated to citizens of the United States — including the rights afforded to US citizens seeking to come to Australia as students, visitors and migrants.

This mimics what happens in Australia. Asylum seekers placed on temporary visas initially gain limited rights, if they are able to apply for permanent residence, they gain more rights including access to citizenship. Once they have citizenship they then have the same status as a person born in Australia. They become ‘Australian’. In this way citizenship reflects a country’s definition of sovereignty and clearly outlines ‘who belongs’.

While the Migration Act does contain bans on foreign nationals found to be in breach of visa conditions or on character grounds, these reflect Australia’s concerns about the migrant as an individual, not as a member of a cohort. In preventing a specific cohort of future citizens of foreign countries from travelling to Australia the Bill does three things.

First, it challenges the sovereignty of the settlement country by defining who is a ‘real citizen’ and who is not. Second, it actively discourages countries in the region from contributing to a regional processing and settlement framework. Third, it undermines the Bali Process on People Smuggling, Trafficking and Persons and related Transnational Crime.

There are 48 members of the Bali Process, including New Zealand and the United States. A successful regional framework with these countries requires cooperation and respect, which includes respect for each nation’s sovereignty and for international law.

These principles have already been disregarded by the Australian government in their mismanagement of offshore processing and settlement (and the subsequent reputational damage to Papua New Guinea and Nauru), the refusal to assist in the 2015 Southeast Asian refugee crisis and the rejection of the resettlement offer from New Zealand in April 2016.

The proposed legislation will cement that disregard by placing a misguided and inward-looking policy objective above the broader goal of cooperation to help address the challenges surrounding irregular migration.