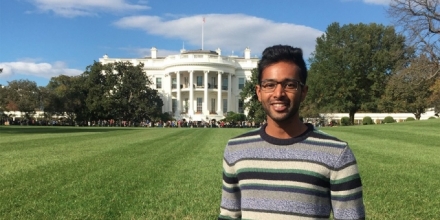 ANU law and economics student Jeeven Nadanakumar has been named the 2015 ACT Multicultural Young Person of the Year at an awards ceremony in Canberra.

Jeeven, a fourth year student who will graduate in 2016, is currently on an exchange to George Washington University in the United States.

Jeeven's parents accepted the award, which consisted of a specially engraved crystal trophy, some multi-coloured roses and a voucher for a hot air balloon ride across Canberra.

"It gives me the confidence to believe I can be an effective voice for young people of culturally diverse backgrounds," Jeeven said.

"Now more than ever, it is important that young people understand they are valued by our community and that their cultural background is an asset, not a liability."

In recent times the value of being a culturally diverse society had been challenged and questioned, he said.

"I think awards like these remind us of how multiculturalism benefits both our society and economy."

Locally Jeeven has been involved in Canberra events including a forum on Australia's asylum seeker policy, where he sat alongside ANU Professor John Minns and law student Sama Khan.

Jeeven will return to ANU next year for his final year, which will include writing his honours thesis on refugee law and the economic contribution that refugees have made in Australia.