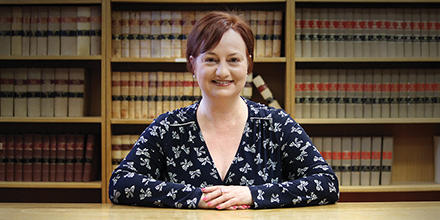 ANU Law senior lecturer Linda Kirk has received a 2017 Australian Government Endeavour Research Fellowship and will spend six months at the Refugee Law Initiative at the School of Advanced Study, University of London.

As a Senator for South Australia the issue of asylum-seekers, particularly children, being held in detention was very controversial, and I felt compelled to speak out against this whenever possible in the Senate Chamber.

When ANU College of Law Senior Lecturer and former Senator Linda Kirk taught law in the 1990s, migration and refugee law courses weren’t offered as electives. However, becoming a Senator in the post-9/11 era of 2002 until 2008 set her on a path that has led her to become a 2017 recipient of an Australian Government Endeavour Research Fellowship.

Her vast experience in the area began with a role as Deputy Chair of the Joint Migration Committee and as a member of the Senate Legal and Constitutional Affairs Committee which led to a five-year role as a Senior Member of the Migration and Refugee Review Tribunals and later this year, thanks to the Fellowship, will see her taking a sabbatical at the Refugee Law Initiative at the School of Advanced Study, University of London, where she has been a Visiting Fellow since 2011.

Since joining the ANU College of Law in 2014, she has been researching how Australia’s refugee status determination system compares to that of Canada and the United Kingdom for her Doctor of Juridical Science (SJD) dissertation.

During her six-month Fellowship at the Refugee Law Initiative, the only academic centre in the UK to concentrate specifically on international refugee law, she will have the opportunity to attend seminars by leading scholars in the field and to discuss her research with other experts.  She also will be able to observe asylum hearings conducted by the UK Upper Tribunal (Immigration and Asylum Chamber).

“Being in the London in particular will be very useful because I’ll be able to go and watch asylum hearings, speak to lawyers and judges, and compare the UK Tribunal’s processes with those of the AAT Migration and Refugee Division” she said.

During her undergraduate studies, refugee and migration law were not offered as elective subjects, and as a Law Lecturer at the University of Adelaide in the 1990s, she taught, researched and published in Constitutional and Administrative law.

However, after she joined the Senate in 2002 – as war and violent conflicts in the Middle East and South Asia were causing a significant rise in the number of asylum-seekers coming to Australia by boat – she witnessed the experiences of those being held in immigration detention centres in outback South Australia.

“As a Senator for South Australia the issue of asylum-seekers, particularly children, being held in detention was very controversial, and I felt compelled to speak out against this whenever possible in the Senate Chamber,” she said.

“I was also a member of the Parliament’s Joint Migration committee which visited some of the detention centres, including Baxter and Port Hedland, as we were conducting inquiries into immigration centres way back then.

“It’s hard to believe really, when you think that was 2002 and now it’s 2017, 15 years later, and we’re still having the same conversations about how Australia treats asylum-seekers. I think if you’d asked me about it back then, I would have said ‘this won’t last very long’ as I believed that Australia would recognise its international human rights obligations.”

While her thesis compares Australia’s refugee status determination processes with the UK and Canada, Linda said she is very much looking forward to the proximity she will have during her Fellowship to Europe, which in 2015 experienced the greatest influx of displaced migrants since the end of World War II.

“In July last year I was awarded a grant by the Odysseus Network to attend its two-week Summer School on EU Immigration and Asylum Law and Policy at the Université Libre de Bruxelles which was a really great experience,” she said.

“I was fascinated by how European Union refugee status determination systems compare with Australia, and at one stage I thought about incorporating a comparison with Europe into my thesis, but because it’s so massive, with so many countries and now the complication of Brexit, I thought better of it.”

On 30 January, Linda will take up a role as a part-time Senior Member of the Administrative Appeals Tribunal (AAT), following her appointment by the Attorney-General, Senator the Hon. George Brandis in December last year.  However she won’t return to her former role reviewing migration and refugee cases.

“I saw my return to the AAT as a good opportunity for me to do some different work, including General Division and Security work, so I can expand my skills and knowledge,” she said.

“And also in the back of my mind I thought that because I am writing my dissertation on refugee status determination and looking at the practices of the Migration and Refugee Division of the AAT and maybe criticising them, it would be better for me to be working in another jurisdiction”

Linda is excited to be part of a long-standing connection ANU College of Law has with the AAT, with colleague Emeritus Professor Robin Creyke a former Senior Member of the Tribunal and Professor Dennis Pearce AO FAAL, author of the definitive guide to the Tribunal, Administrative Appeals Tribunal, which is now in its 4th edition.