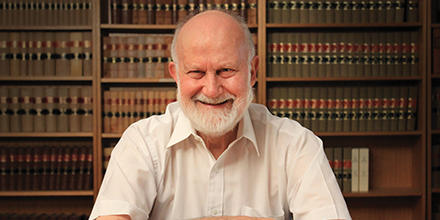 I’m particularly delighted to have been chosen for public law in Canberra, where there are so many strong candidates. It’s also very rewarding to see such strong representation of ANU Law alumni on this year’s list.

Professor Pearce received the top honour for public law in Canberra in 2019. It marks the fifth year he has been included in the peer-measured list, which identifies one lawyer per practice area across states and territories.

He said receiving the peer-reviewed award was gratifying given the high performers in his category.

“I’m particularly delighted to have been chosen for public law in Canberra, where there are so many strong candidates,” he said. “It’s also very rewarding to see such strong representation of ANU Law alumni on this year’s list.”

Only one lawyer is recognised as the Lawyer of the Year for each specialty and location after receiving the highest consensus score.

“They are both stars in their field, so to be in their company is particularly flattering,” said Professor Pearce.

Although the survey is limited to lawyers in the private profession, Professor Pearce was recognised for his work as a consultant with HWL Ebsworth Lawyers.

A specialist in statutory interpretation, review of government action, and judicial and tribunal proceedings, Professor Pearce said his current work as a researcher and private consultant provides him with the “best of both worlds”.

“It’s great to have the private-practice connection; it opens up a range of activities that you wouldn’t otherwise get. I often do reviews for the Commonwealth and New South Wales governments, as well as general advice work,” he said.

The 12th edition of the survey contains 3,780 individuals in 92 practice areas working in 422 firms.

Professor Pearce researches administrative law at Centre for International and Public Law. He is currently writing his 20th book, the ninth edition of Statutory Interpretation in Australia, which is due to be published later this year.

The following ANU College of Law alumni were also named Lawyers of the Year in their practice area.

The full list is available at the Best Lawyers™ website or via the Australian Financial Review's annual interactive.