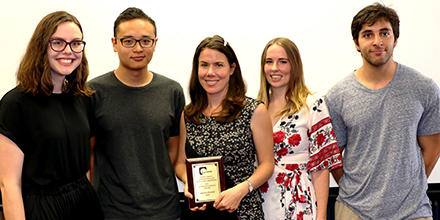 It is testament first and foremost to the quality of our students and their coach, Kate Ogg; but also a comfort to see just how capable the next generation of legal minds are.

The 2018 ANU Jessup mooting team succeeded in reaching the quarter-finals before they were defeated on Friday afternoon.

The team – made up of Sophia Collins, Kate Renehan, Matthew Staraj, Madhav Fisher and Einson Pang – spent their summer preparing for the Australian rounds of the 2018 Philip C. Jessup International Law Moot Court Competition, with the careful guidance of their coach, senior lecturer Kate Ogg.

The 2018 Jessup problem, Case Concerning the Egart and the Ibra (People’s Democratic Republic of Anduchenca v. Federal Republic of Rukaruku) involved a dispute between two fictional states in the ‘Kumatqesh’ Ocean.

At the crux of the dispute was Rukaruku’s use of a spy drone (the Egart) and the Anduchenca’s retaliation by commissioning a nuclear-armed sub (the Ibra), however, the problem provides extensive details about the trade partnerships and geo-politics of the two states.

Ms Ogg said while the team members were disappointed not to progress further in the competition, overall they were very grateful that they had had the opportunity to be part of the Jessup experience.

“They also are very appreciative of the ANU College of Law’s support of the Jessup competition,” she said.

Each year ANU College of Law hosts the Australian round of the Jessup, which is among the most prestigious and competitive international mooting competitions that Australian law students can participate in.

For ANU Law’s new Dean Professor Sally Wheeler OBE, it was a strong beginning to her tenure at the college.

“The ANU College of Law team should be immensely proud following its progression to the quarter-finals in the Jessup last week,” Professor Wheeler said.

“Each year the competition asks students to acquire a level of expertise in international law that is well above novice, not to mention an understanding of the complex geo-politics of an entirely fictional region.

“It is testament first and foremost to the quality of our students and their coach, Kate Ogg; but also a comfort to see just how capable the next generation of legal minds are.”

Professor Wheeler also spoke about the ANU Law School’s role as hosts of the competition.

“While at the end of the day, the Jessup is a competition, it is also a meeting of the best minds among Australian law students, and we are honoured each year to open our doors to students from across the country, and to have the opportunity to collaborate with them, their academic coaches, and the judges from both academia and the profession who volunteer their time.”

Professor Donald Rothwell, Professor of International Law at ANU Law School, said that given the standard of the Australian Jessup Moot rounds, the team’s achievement in making the quarter-final rounds meant the team would most probably be ranked top 20-30 in the world.

“That is a still a great achievement,” he said.

“Well done to the team and to Kate for their tremendous commitment and hard work over the summer.”