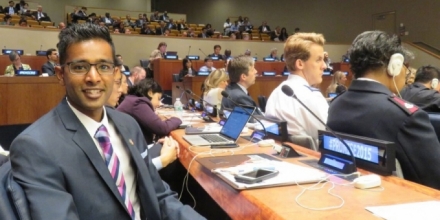 Jeeven attended high-level meetings on global peace and security as part of the 70th session of the UN General Assembly.

"It was one of the most exhilarating weeks of my life as I got to meet, hear from and interact with heads of states and governments, prominent philanthropists, business leaders, other civil society representatives like me and change makers from all over the world," Jeeven said.

Jeeven is in his fourth year at ANU and is passionate about sustainable economic development. He has worked for World Vision as the Youth Representative for Canberra and the wider region for the past three years.

"I have spent three years speaking to thousands of young Australians about how we can end poverty within a generation through my work with World Vision Australia, so to be there in New York in the middle of all the action as World Vision Australia's representative at the UN felt extremely special, rewarding and humbling. A highlight of my career so far," he said.

Jeeven was also in New York to represent Australia at talks on global peace and security at an inaugural Youth Summit organised by the US State Department.

"To have had the opportunity to rub shoulders with world leaders and change makers at the United Nations at such an early stage of my career felt both surreal and also inspiring," he said.

"I feel motivated and energised to continue seeking out dynamic career opportunities that combines the skills and education I've gained from my time at ANU with what I'm passionate about," he said.

Jeeven is now on exchange studying economics at The George Washington University in Washington DC.