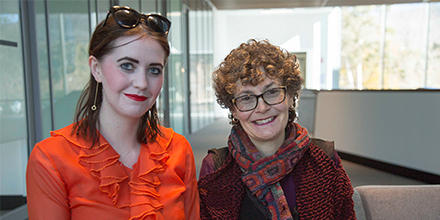 I couldn’t do this on my own, but it dawned on me that if I had a group of students working with me then it would be a way of managing those various pressures.

The Australian National University (ANU) College of Law Professor Kim Rubenstein FAAL, FASSA and Bachelor of Arts/Laws (Hons) student Elizabeth Harris have co-authored a case note for the inaugural edition of a research journal about a successful pro-bono citizenship appeal Professor Rubenstein ran, together with more than 30 Administrative Law (LAWS2201/6201) students, in 2017.

After an initial application for Australian citizenship on the basis of statelessness on behalf of their child was refused in 2016, the mother wrote to Professor Rubenstein seeking her opinion after finding her comment on a statelessness case involving a child born in Australia to a mother held in offshore detention.

“I knew she (the Zimbabwean mother) had a right of review before the Administrative Appeals Tribunal, but I also knew I had 400 admin law students to teach and a lot on my plate. I couldn’t do this on my own, but it dawned on me that if I had a group of students working with me then it would be a way of managing those various pressures,” said Professor Rubenstein, who has held a legal practising certificate throughout her academic career.

“I put an email out on a Friday to the 400 students asking if anyone would be interested in principle in working on a pro-bono case with me. Within half an hour, I had about 80 replies. Among these, there were 36 students who I met with that Sunday night at the law school. They formed our core working group.”

For Elizabeth, then in the third year of her flexible double degree, the case had parallels with her own family background.

“My dad is actually Zimbabwean and is in a similar situation in having his Zimbabwean citizenship stripped because he took on other citizenship,” she said.

“Citizenship matters are a fraught matter politically and legally, so it’s been interesting to see how quite an esoteric section of law can have all these practical implications to someone’s life, for better or worse.”

Working in six teams to research various sections of Australian, Zimbabwean and international law, the cohort of undergraduate and postgraduate students built a case on behalf of the applicant for review before the Administrative Appeals Tribunal.

They argued the applicant satisfied section 21(8) of the Australian Citizenship Act for a conferral of citizenship on the basis of statelessness, given the child was born in Australia and was not entitled to acquire Zimbabwean citizenship both as a matter of law and also due to administrative obstacles in place by Zimbabwean authorities.

These bureaucratic complexities were emphasised recently when the Supreme Court of Zimbabwe reprimanded the registrar-general, a key figure in the case note, for denying citizenship to Zimbabweans.

Despite the hearing for the appeal occurring during an exam period, six students attended the full-day hearing. While Professor Rubenstein made the oral submissions, she noted students were “there to help at every point of the process”.

The countless hours of research and preparation were worth it, however, with their appeal ruled successful just over a month later.

“That was the icing on the cake. In addition to the outcome, the experience was so beneficial for the students and the case note is an affirmation of that experience,” said Professor Rubenstein.

“This case is an example for other countries. It’s relevant to the application of citizenship law in Australia. It is on the record for other cases and, now it’s in an international journal, it has a broader outreach in terms of other countries’ application of an international convention,” she added in reference to the United Nations’ Convention on the Reduction of Statelessness .

The case note underwent a rigorous editorial process entailing multiple revisions, and its publishing capped off a “particularly empowering experience” for all involved, said Professor Rubenstein.

“Elizabeth really did the hard yakka on writing up the draft which I then reviewed, so it’s very much a student-driven piece,” she said.

“For me, there is the intellectual engagement from what I teach about with administrative law and citizenship law, which this was a combination of. I have done quite a bit of collaborative work with former students on research, but this is the first time I’ve involved a group of current students on the spot in my running of a case.”