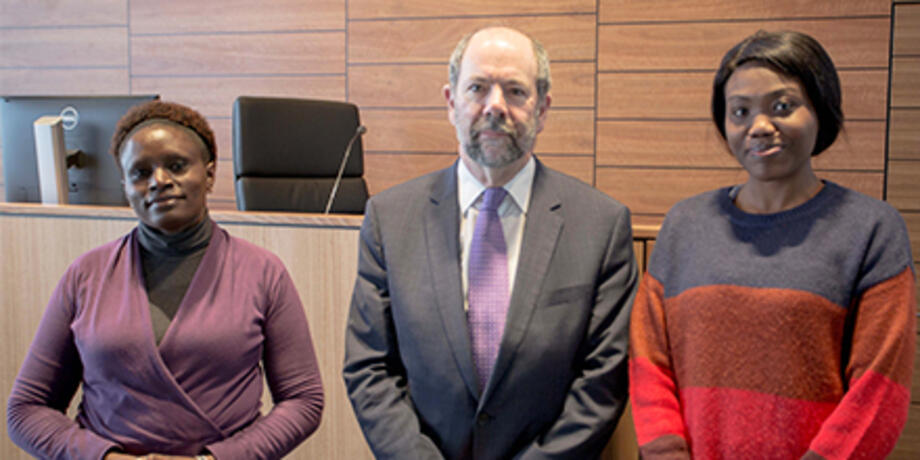 Professor Donald Rothwell FAAL (centre) with Master of Laws students Eunice Gitau (left) and Temitope Muraina. The three will attend this year’s Yeosu Academy of the Law of the Sea in South Korea. Photo: Tom Fearon/ANU

I believe the knowledge I’ll gain from attending this program will enable me to make (Law of the Sea) proposals to the government. I hope I can make a difference to this field in Nigeria.

When Eunice Gitau and Temitope Muraina arrived at The Australian National University (ANU) earlier this year from Kenya and Nigeria respectively, neither imagined that studying the Law of the Sea would result in them traversing it again.

But that’s exactly what the Master of Laws (LLM) students will do next week when they head to South Korea to attend a renowned international academy featuring some of the world’s leading Law of the Sea experts.

From more than 260 initial applicants, the pair was among just 45 offered a place at this year’s Yeosu Academy of the Law of the Sea that runs from 26 August to 6 September.

First held in 2013, the annual two-week program attracts government officials, researchers and other professionals engaged in ocean policy-making, as well as graduate students from developing countries interested in ocean affairs.

Both students were encouraged to apply to the academy by Professor Donald Rothwell FAAL, their lecturer for International Dispute Resolution (LAWS4223) and one of a dozen instructors at this year’s event.

Comprising lectures, workshops, excursions as well as written and oral examinations, the academy provides an intensive exploration of environmental, security and other issues related to the Law of the Sea.

“I can’t even describe how happy I was. This is a great opportunity to learn from world-renowned experts about an intriguing area of international law,” said Eunice, who works at the Kenyan Office of the Director of Public Prosecution.

“In Kenya, we have had maritime disputes with Somalia and prosecuted more pirates than any other nation. I believe this experience (in Yeosu) will develop my knowledge so I can make informed proposals related to the Law of the Sea as it applies to Kenya,” she added.

Temitope described being selected for the academy as a “great achievement” that has deepened her interest in the Law of the Sea, which she first discovered during her undergraduate studies.

Like Eunice, she hopes to use her legal expertise to address regulatory challenges in her home country’s maritime industry.

“As a developing country, Nigeria has a lot of gaps in its legal system. Even though its energy sector is flourishing, there are certain areas of international law, such as the Law of the Sea, where many developed countries have an advantage in terms of domestic implementation.

“I look forward to returning home after my studies and I believe the knowledge I’ll gain from attending this program will enable me to make proposals to the government. I hope I can make a difference to this field in Nigeria,” added Temitope, an aspiring diplomat and international law educator.

Professor Rothwell said this year presented a “unique opportunity” for Eunice and Temitope to become the first ANU students to undertake the program.

“The academy is very generously funded by the Korean Foreign Ministry and it’s predominantly set up to allow for specialist learning of the Law of the Sea for participants from certain parts of the world.

“Nearly all the international students I had in International Dispute Resolution were eligible to have fully-funded engagement in this program. That, combined with my involvement as an instructor, meant I was able to make them aware of this opportunity,” he said.

Currently in their second semester at ANU, Eunice and Temitope said they have enjoyed the academic rigour of their LLM program, particularly the instruction from world-renowned scholars.

“What I’ve loved about my ANU experience has been the ability to learn from experts at the top of their fields. The interaction with lecturers has been amazing and something I’ve not experienced before, especially the freedom of inquiry,” said Eunice.

“My experience at ANU has also been very positive,” said Temitope.

“It took me a while to adjust because it’s pretty cold here, but I believe I have become more confident in expressing myself. The lecturers are authorities on their subject matter, but they are also approachable and relatable. It’s a great opportunity to be able to learn from people like Professor Rothwell – whatever you hear him say you can take it to the bank.”