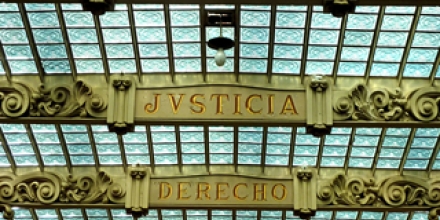 In a display of remarkable versatility, ANU College of Law Dean and photography enthusiast Michael Coper has won the community section of the Adelaide Law School 'Images of Justice' Photographic Competition. He also won third place with a second entry.

Michael Coper's winning entry, entitled Justice Above All, shows the high-pitched glass ceiling of the Supreme Court of Argentina in Buenos Aires. Graphically etched in Spanish on beams supporting the ceiling are the words Law, Justice, Truth and Equality. A single and rather shabby light bulb hangs from the centre of the ceiling - redolent, perhaps, of the kinds of interrogations that may have taken place during the dictatorship.

Michael's third placed entry, entitled Reflections of Justice, depicts the High Court of Australia, as seen across, and thus reflected in, Lake Burley Griffin in the early morning, with early morning walkers and their evidently reluctant dogs entering stage right. The meaning of this symbolism, if any, is obscure.

An independent panel of four judges comprised a South Australian Supreme Court judge, a professional photographer, the photographic manager of The Adelaide Advertiser, and the managing director of Atkins Technicolour. The competition also exhibited the work of featured artist, NSW Crown Prosecutor and celebrated photographer Mark Tedeschi QC. The entries of the finalists may be viewed at http://www.law.adelaide.edu.au/images-of-justice/ .

'There is something mystical about the concept of capturing a moment of time in a photographic image', Michael Coper said following his win in the competition. 'It also speaks to the tension between constancy and change, which is at the heart of legal development. This is a philosophical interest of mine, which I will have more time to pursue next year when I am no longer Dean.'

Michael Coper was congratulated by the Dean of Adelaide Law School and originator of the competition, Professor John Williams. The two Deans are collaborators, with ANU's Fiona Wheeler, on an ARC-funded oral history of the High Court. The Deans' mutual interest in photography raises the question of whether there might now also be a visual history.