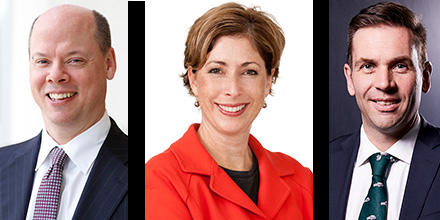 Three ANU College of Law alumni claimed top honours at the 2019 Lawyers Weekly Partner of the Year Awards on 30 May. The annual awards celebrate outstanding performance by partners, or partner equivalents, across individual practice areas within the Australian legal profession.

His Sydney-based business unit comprises 40 lawyers whose work is supplemented by lawyers in offices across the national firm as required. Clients include Australia's largest commercial enterprises and, in the case of several international clients in the tech sector, number among the largest and most influential corporations in the world.

“I'm honoured to have won the recent Telecommunications Partner of the Year and overall Partner Excellence award for 2019. I'm very lucky to have exceptional clients and a wonderful team, with whom I have worked for a long period, who deservedly share this accolade,” said Mr Lloyd.

“One of the most rewarding aspects of my role as a more senior partner is having the opportunity to take an active role in guiding and mentoring the next generation of young partners-to-be, and creating an environment where younger lawyers are stimulated and engaged. These rising stars of the firm have learned and developed their skills to ascend to a position where they are able to assume management roles and take ownership of client relationships.”

She said the Lawyers Weekly award represents recognition of the support she has received over many years from mentors and colleagues in addition to “opportunities to support numerous, diverse Commonwealth projects and activities”.

“The award also recognises that ‘Government’ is an expertise area in itself. Practising in Government law challenges the ‘whole’ lawyer. This is because it involves an understanding of technical legal areas such as commercial law and contracting; administrative law; and governance – but also a strong understanding of the accountability framework within which governments and public sector employees operate, and the dynamic that political and other sensitivities bring. It is fascinating,” she said.

“Studying law at the ANU Law School (as it was then) was an ideal preparation. The location in Canberra helped, but I also graduated with a strong understanding of public law and public institutions, and of the role and importance of the law in that broader context.”

"It was humbling to be recognised as the 2019 Lawyers Weekly Corporate Partner of the Year. The award is great recognition for the work that the team at Hazelbrook Legal are doing. On a personal level, it is extremely satisfying to see Hazelbrook Legal recognised as a finalist, and now winner, alongside Australia's largest and most successful law firms. Having stepped out of a career in 'big law' to establish Hazelbrook, this is a very satisfying outcome,” said Mr Griffin.

“ANU played an important role in preparing me for my career in law and business, and I believe I particularly benefited from the cross-disciplinary nature of a combined Science/Law degree."