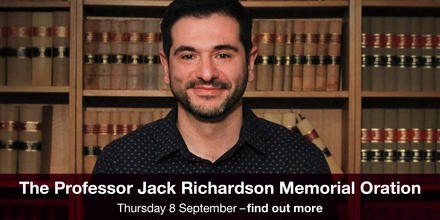 The Oration, to be delivered on Thursday 8 September, is hosted by the ACT Law Society and the Association of Corporate Counsel and sponsored by Clayton Utz.

Dr Stellios will speak on the topic 'Marbury v Madison in an Age of Statutory Discretion', examining the way the judiciary enforces constitutional limits on government power where statutes give decision-makers discretionary authority.

“For example, where a government officer stops a prisoner on parole from speaking to the media, preventing him from expressing his political views about government,” Dr Stellios said.

“While the Constitution protects the freedom of political expression, how does a court make sure that the government decision-maker does not breach the constitutional requirement?”

“I’ll be exploring how the High Court has addressed this question and provide some observations on the impact its approach has for the judicial review of government decision-making,” he said.

The Richardson Oration is held each year in honour of the late Professor Jack Richardson AO who became the Commonwealth’s first Ombudsman in 1977 and a former Dean of the ANU College of Law.

Professor Richardson was pivotal in the College’s early growth and both the College and the Commonwealth Ombudsman's Office, still bear the stamp of his vision.

The Oration will be held at the Hotel Realm in Barton. Registrationsclose Tuesday 6 September 2016.