ANU hosts 16 law schools for national round of Jessup Moot 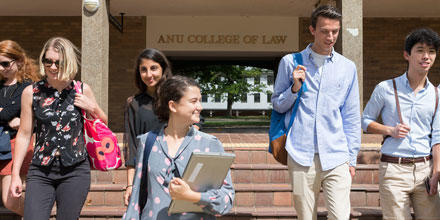 Students from 17 law schools across Australia will be on campus this week to contest the Australian round of the 2019 Philip C Jessup Moot competition.

It’s a privilege to be among bright young lawyers and see how they progress from their beginnings as students to mooting at a professional standard.

Some of the University’s best international law students will showcase their written and oratory skills against their peers when the ANU College of Law hosts the Australian round of the 2019 Philip C Jessup Moot from 5-8 February.

The world’s largest moot court competition involves students from more than 680 law schools in 100 countries, including 17 laws schools across Australia who are judged by international lawyers from the highest levels of the Australian government, private practice and academia.

“We’re very excited that this year ANU will host teams from the University of Southern Queensland and Southern Cross University for the first time,” says ANU co-coach and Senior Lecturer, Kate Ogg.

“It’s very exciting to be part of the world’s most well-known moot competition, and to co-coach the ANU team, which has done well in previous competitions.”

This year’s problem involves an International Court of Justice case between the fictional states of Aurok and the Republic of Rakkab and their hunting of the Kayleff Yak. The problem raises a number of different issues in international law including protection of endangered animals and rights of indigenous peoples.

“It’s a privilege to be among bright young lawyers and see how they progress from their beginnings as students to mooting at a professional standard.”

“The Jessup is much more than a competition,” says Professor Anthony Cassimatis, the competition’s National Administrator and a legal scholar at the University of Queensland.

“It is a unique experience, allowing law students from across Australia and the world to become completely immersed in the theory and practice of public international law.

“It also offers an opportunity to meet some of Australia’s most prominent international lawyers from government, from private practice, and from our universities, who generously volunteer their time to judge the oral rounds of the competition.”

The grand final will be held in the High Court of Australia on Saturday 9 February.