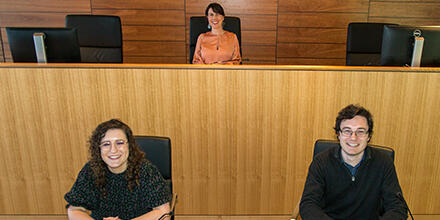 It is an opportunity for law students to think creatively about these issues and ... the areas we need to move towards in law reform.

The Australian National University (ANU) College of Law will host Australia’s first gender identity and sexuality moot in October 2020, with former High Court of Australia judge, The Honourable Michael Kirby AC, CMG (HonLLD '14), named as one of the judges for the moot’s final.

The moot will explore transgender identity, children’s rights to choose their identities and the rights to transitioning.

“The particular issues we will be dealing with are around anti-discrimination law and the overlap between privacy, gender and sexual identity more broadly. These are the issues that are going to become before the courts over the next decade,” says Andrew, a final-year Bachelor of Laws (Hons)/Science student.

Earlier this year, Madeleine completed a legal internship at the International Bar Association in London. Additionally, she was a finalist in The London School of Economics-Featherstone Sexual Orientation and Gender Identity Moot – an experience that inspired her to propose a similar competition at ANU.

“These issues of diversity in the law are now more present than ever. In particular, following the #MeToo movement, we have a heightened awareness of needing to talk about these issues on a broader social level, particularly in the legal profession that is meant to be upholding these values,” says Madeleine, a Bachelor of Arts/Laws (Hons) student.

Dr Ogg, a senior lecturer and director of mooting and student competitions, notes the inception of the Gender Identity + Sexuality Moot marks another proud milestone in the College’s history.

“Through the LRSJ project, ANU has always been ahead of the game on these type of issues. For us, running and hosting the first moot on gender identity and sexuality in Australia is really exciting,” she says.

The competition will be held virtually due to the current COVID-19 restrictions. It is open to all law students in Australia and New Zealand.

E-mooting also has many benefits as an environmentally friendly and inclusive form of competition. Judges and teams from around the country can participate, removing traditional barriers of cost and distance. It also provides training for future careers which will no doubt require familiarity with online advocacy.

“Our College wants to create a sense of inclusivity in law schools and law students and to say everyone has a place here. It is an opportunity for law students to think creatively about these issues and to integrate them and think about the areas we need to move towards in law reform,” says Madeleine.

The moot also aims to address the social implications of the problems students will be exploring. Teams will nominate a charity dedicated to improving the lives of LGBTIQ+ people as part of the registration process.

The winning team will have the prize money ($500) donated in their names to the charity of their choice and participate in a five-day mediation workshop courtesy of sponsors Resolution Institute, the largest dispute resolution membership organisation across Australia and New Zealand.