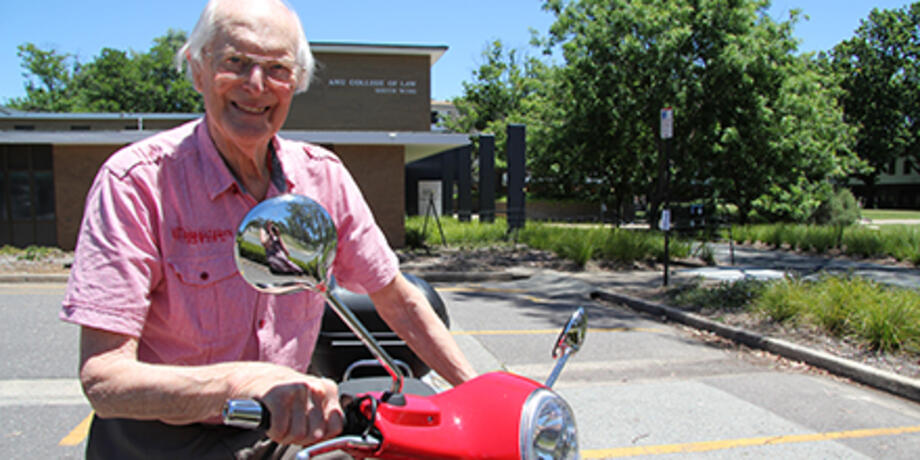 Professor Peter Bailey rode into his 30-year career at the ANU College of Law on a BMW 800. This week the 89-year-old will proudly ride out on his shiny red Vespa.

There is something poetic about being able to finish a 70-year career by riding off into the sunset, even if it’s on a bright red Vespa crammed with farewell flowers and decades of office memorabilia.

By 1986 Peter Bailey had worked closely with seven prime ministers over four decades and should have been winding down and preparing for retirement. Instead the 59-year-old swapped policy for teaching and research, becoming a Visiting Fellow at the ANU College of Law. This week, after 30 years and several significant publications, Professor Bailey will finally retire.

“I really want to be able to do other things. I have got other interests than the academic interests. I have a family and I’m a member of a lot of bodies like Relationships Australia which I’ve been a member of for a long time.

“I just thought I’d like to escape the rigour of the academic environment and relax a bit.”

Professor Bailey’s wife Leila was diagnosed with dementia some years after he joined ANU Law, and sadly she died in 1999.

“I think if she hadn’t died, and if she’d said let’s retire, let’s go down to the coast I would have said yes,” he said.

“But I thought I’d stay here because I was interested in my job.”

Through the duration of his 40-year-long career in the public service he worked with seven prime ministers, from Menzies to Fraser. He began in 1946 as personal assistant to Sir George Knowles, who at the time was Secretary of the Attorney-General’s Department. He moved across to Treasury, rising to the unusual rank of First Assistant Secretary in the Office of the Prime Minister Harold Holt.

“When Mr Holt became the PM I said I didn’t want to be a private secretary so I was appointed as First Assistant Secretary, a position which never occurred again,” he said.

He held that position when the Prime Minister disappeared off the coast of Victoria.

“Holt’s press officer Tony Eggleton rang me and we agreed I should be the one to tell Holt’s wife Zara that the Prime Minister was missing, while he arranged for a VIP plane to Melbourne” he said.

“Zara asked me if Holt had been wearing his sandshoes and when I said ‘yes’ I remember she said with horror – ‘Oh, he’s gone’. I never understood why she said this.”

Professor Bailey assisted in the negotiations to establish the Australian Human Rights Commission and was the inaugural CEO and Deputy Chairman of the Commission from 1981-86. In 1972 he was awarded an OBE while in the public service and in 1999 he received an AM while at ANU Law.

He joined the law school in 1986 when the then Dean, Professor David Hambly, offered him a role as a visiting fellow teaching human rights in the new civil liberties course.

At a morning tea on Wednesday, the College’s current Dean Professor Stephen Bottomley referred to Professor Bailey’s illustrious career, contribution to ANU Law and the esteem in which he is held among staff.

“Peter is one of Australia’s foremost thinkers and contributors in the law on human rights, and in his time here many generations of students have had the immense benefit of his knowledge, wisdom and insight,” he said.

“As his colleagues we have also greatly enjoyed his involvement in our teaching, research and administrative activities. In his quietly spoken but passionate manner, Peter has been the embodiment of the collegial spirit that we strive to maintain.”

When Professor Bailey started at ANU College of Law he rode in on a BMW 800. While that model is a tad too heavy these days, he will proudly ride out on his shiny red Vespa.