Home » The Role of the ILC & VCLT in International Investment Law

The Role of the ILC & VCLT in International Investment Law 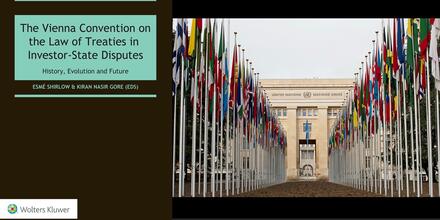 Since it was adopted in 1969, the Vienna Convention on the Law of Treaties (VCLT) has come to be widely regarded as one of the International Law Commission’s (ILC’s) greatest successes. Indeed, the VCLT’s drafting history reflects that the ILC sought to create an enduring set of provisions constituting a law of treaties – regardless of the specific features of the individual treaties to which such rules might come to be applied. This enduring legacy is quite notably reflected in the role that the VCLT plays in modern international investment law and investor-State dispute settlement (ISDS). In the decades since it entered into force, the VCLT has had a profound influence in investor-State disputes. In the coming decades, such disputes are only likely to become more relevant to understanding the VCLT’s rules, and the VCLT will, in turn, impact and shape opportunities for investment law and arbitration into the future. The relationship between the ILC’s work, the VCLT, and international investment law and ISDS is developed in the recently published book, The Vienna Convention on the Law of Treaties in Investor-State Disputes: History, Evolution, and Future, edited by Esmé Shirlow & Kiran Nasir Gore (Kluwer, 2022). While the VCLT alone does not provide solutions to all the challenges currently faced by international investment law and ISDS, nor all of the challenges likely to emerge in the future for this body of law, the ILC’s vision and the VCLT’s tools certainly have a key role to play.

The promo code 20VCLT22 offers a 20% discount on the retail price of The Vienna Convention on the Law of Treaties in Investor-State Disputes: History, Evolution and Future in the Wolters Kluwer eStore. The code is valid through to 28 February 2023.