Home » For One Day Only: Law, Space, Matter

For One Day Only: Law, Space, Matter

Presented by ANU Centre for Law Arts and Humanities and Institute for Interdisciplinary Legal Studies, University of Lucerne 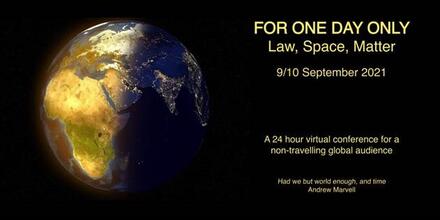 Recent years have witnessed a new wave of critical approaches to (re-)thinking the entanglements of law, space and matter. From David Delaney’s ‘nomosphere’ and Peter Sloterdijk’s ‘nomotop’ to Andreas Philippopoulos-Mihalopoulos’s ‘lawscapes’ and Daniela Gandorfer’s ‘matterphorics’ – scholars working in diverse theoretical traditions have rejuvenated discussions on the substance and materiality of law, and opened new perspectives on the reciprocal materialisation of the legal and the socio-spatial.

Matter matters – all the more in our present age of crises and challenges, which press us towards a renewed critical reckoning with the relation(s) between law, place and space, between spatiolegal representations, discourses, and materialities. In this context, we turn again to “the complex, shifting, and always interpretable blendings of words and worlds” (Delaney) in which law is embedded and unfolds.

For One Day Only brings together a global community of thinkers, scholars and artists for 24 hours of conversations on the moment we are living through and the future we want. Hosted by an international consortium of research centres spanning four continents, the workshop sessions will roll around the world from Canberra and Johannesburg, through Rome, Helsinki and Lucerne, to Virginia and Melbourne. Together, we will showcase cutting-edge work that captures the stakes of critical, theoretical and socio-legal enquiry into the spatialisation of law and the legalisation of space, and which poses fresh challenges for thinking about law’s depth and character, its politics and social resonances.

For One Day Only is part of the project Critical Times: Law, Humanities and Critique.

Market/Place: A Funny Thing Happened on the Way to the Forum

Hosted by the Centre for Law, Arts and Humanities, The Australian National University

Legal space and legal geography have been important focuses of research in socio-legal scholarship in recent years. In what ways has the experience of public space been transformed under the pressures of neoliberal ideology and contemporary governmentality? How has biopolitics and securitization changed the materiality of public space and with what impacts on democratic life? How has COVID-19 constrained, revealed, or accelerated these processes? What are the opportunities or challenges facing us?

The Centre for Law, Arts and Humanities has assembled a panel of world class interdisciplinary scholars to reflect on these questions and to talk about their research—historical, theoretical, and experiential—at the intersection of law, power, and public space.

Hosted by the Faculty of Law, University of Helsinki

Emptiness is assumed to be void of legal and political significance. Spaces without clear presence appear to have few connotations with the workings of the law and they are typically thought of as spaces that need to be filled. Law is usually seen as stepping in at the point when the emptiness is filled. This panel challenges these assumptions. It looks at emptiness generated by the law and explores different notions of emptiness and its significance for law, politics and ethics.

Algorithms and the End(s) of Law

Hosted by the Faculty of Law, University of Roma Tre

We understand law as a complex of abstractions by which communities agree to be bound. Definitions of rights and rules of procedure produce an agreed version of the “truth” or of reality.  But it has not always been like this.  For many centuries determinations of rights and remedies was entrusted to the will of “god” as interpreted by religious authorities.  The concept of law emerged from this system of religious control as a response to the perceived need to humanize the system of justice.  Now, the digital revolution has produced a new phase in the cycle in which algorithms, under the guise of operationalizing legal principles, are instead supplanting them and creating their own version of the truth.  If law as we now know it begun at a certain point, can we also say that, thanks to the pervasive social power of technology, it is now at its end point?

This panel will address this question focusing on the following issues:

In the Eyes of the Law

Hosted by the Institute for Interdisciplinary Legal Studies - lucernaiuris, University of Lucerne

Immunity and Quarantine: The Biopolitics of Space-Making in Pandemics

“Immunity”, whether referring to the individual (the official, the diplomat, the patient, the police officer, the doctor) or to the group (civil officers, the police, pharmaceutical companies, the “herd,” or the population) has shuttled among the registers of language that are held responsible for human and social life. Used in law, medicine, politics, religion and philosophy, the idea of immunity underpins that which constitutes the human and its relation to the non-human, disease, impurity, danger, and spatial containment. If natural immunity is the abilityto resist infection, legal immunity is the granting of an exemption by a higher authority.  In the case of ecclesiastical immunity, immunity is an exception from secular or civil duties. The afterlife of this ecclesiastical model can be found, for example, in the notion of qualified immunity given to police officers in the US who have murdered African Americans. Immunity as a category has gone hand in hand with the idea of quarantine: the enclosure of peoples and places to protect the larger population from contamination of various kinds - epidemiological, ideological, cultural, psychic, and moral. Together, immunity and quarantine have been mutually constitutive in the spheres they have shaped and curtailed.  In this seminar, we will explore their interplay both in the context of the differential spatial logics of the Covid-19 pandemic and the cultural and political ramifications of the AIDS epidemic. Theories on vaccines and immunity, biopolitical thought, critical race theory, as well as cultural products such as literary works and art projects will feature in the presentations.

In and Out of Place

Hosted by the Institute for International Law and the Humanities, University of Melbourne

Addressing ourselves to the responsibilities of being ‘in and out of place’ might be one way of encapsulating a central theme of law and humanities scholarship in Australia.  The Institute for International Law and the Humanities has assembled a panel of emerging scholars to attend to the topics, arguments, instruments and aspirations of place as jurisprudents cross the city, and cross between cities and nations.