'Dissonance and Distrust': A Silver Jubilee 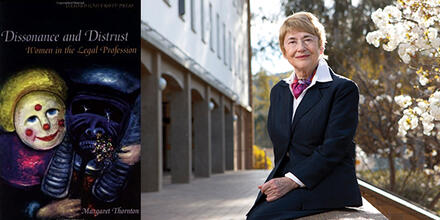 In 1996, Margaret Thornton’s landmark book Dissonance and Distrust: Women in the Legal Profession (Oxford University Press) was published. This webinar is a celebration of the book’s insights and its continuing relevance and resonance for the study of women in the legal profession today.The seminar brings together Emerita Professor Mary Jane Mossman (York University) for her opening address, followed by three Australian speakers, each taking one of the key themes in Dissonance and Distrust:

The event will close with a response from Professor Thornton and questions from the audience.

In Dissonance and Distrust: Women in the Legal Profession (Oxford University Press, 1996), Margaret Thornton provides a compelling theoretical account of the continuing resistance to the participation of women as legal professionals, despite their increased presence in law schools and in some areas of legal practice. She suggests that women are still 'fringe-dwellers in the jurisprudential community' (Thornton 1996: 3-4) and will remain so until it is recognised that the issue is not simply one of women being 'let in' to the profession in equal numbers to men, but also involves posing fundamental questions about the character and constitution of law as it is taught and practised.