Film Screening of 'Utopia' with Q&A 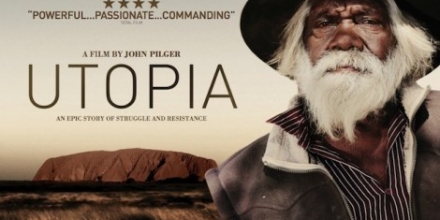 ‘Australia has a very black past; Utopia shows real-life stories of what has happened over the past 225 years. I cried like I had lost a family member on three occasions watching this film – a must-see for all Australians.’

Drawing on his long association with the first people of Australia, Pilger’s Utopia is both an epic portrayal of the oldest continuous human culture and an investigation into a suppressed colonial past and rapacious present.

“This film is a journey into that secret country,” says Pilger, “It will describe not only the uniqueness of the first Australians, but their trail of tears and betrayal and resistance – from one utopia to another”. Indigenous and non-Indigenous Australians came from all over the country to hear the call for a renewed struggle for justice and freedom for Australia’s first peoples at Utopia’s premiere in January this year at The Block in Redfern, Sydney.

Jon Altman is a research professor in economics/anthropology at the Centre for Aboriginal Economic Policy Research in the College of Arts and Social Sciences, ANU; he has researched Indigenous development issues in Australia since 1977.

Tjanara Goreng Goreng is an Assistant Professor of Indigenous Studies at The Ngunnawal Centre at the University of Canberra. She has worked for over 30 years in changing systems and implementing bi-cultural exchange in many organisations and government agencies and is the founder of The Foundation for Indigenous Recovery and Development, Australia.

Dr Asmi Wood is a Senior Research Fellow and the Higher Degree Research manager for the National Centre for Indigenous Studies at the ANU.