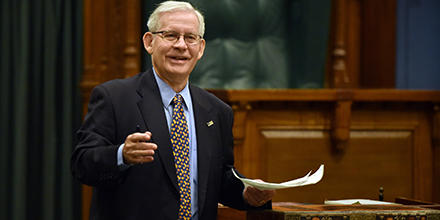 Reform and renewal in constitutional interpretation and legal education

A conference in honour of Professor Michael Coper

Michael Coper has had a distinguished career as a constitutional lawyer and educationalist, from influencing a dramatic change in the law on section 92 of the Constitution, to conceiving the pioneering Oxford Companion to the High Court of Australia, to urging law schools, nationally and internationally, to embrace a pervasive ethos of law reform, social justice and public service.

In the year of his 70th birthday, the ANU College of Law is celebrating Michael’s career by holding a conference with the general theme of reform and renewal in constitutional interpretation and legal education, using as a launch pad select aspects of Michael’s contributions in these areas. Over 20 eminent speakers will range over new and different ways of thinking about and doing law and legal education, from the vagaries of legal doctrine, to the realities of the judicial process, to the insights we can draw from biography and imagery, to the purposes and values that underpin the role of law schools.

Michael is a graduate of Sydney Law School, was one of the founders of the UNSW Law School, and, following stints of government service and private practice, was Dean of the ANU College of Law for a record term of fifteen years. He has now returned to the classroom, to challenge, provoke and inspire the students he first confronted 45 years ago.

CPD points available for this event.

Ways of judging: The intractable dilemma of the judicial process

Panel discussion: Legalism, realism, and the tension between legitimacy and credibility

Ways of seeing: Life stories in words and pictures

Being a lawyer: Professionalism, values and service: Prof Kim Economides
Being a law dean: Aspiration and reality: Prof Stephen Bottomley
Being a global leader: Challenges of internationalisation: Prof Duncan Bentley