Book launch: Law of the Sea in South East Asia 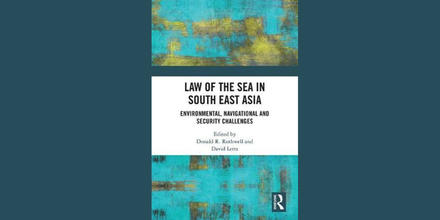 Law of the Sea in South East Asia: Environmental, Navigational and Security Challenges

On Tuesday 19 November 2019 at 5.15pm the Chief of Navy, Vice Admiral Michael Noonan, AO, RAN will launch the recently published book by Rothwell/Letts (eds) Law of the Sea in South East Asia (Routledge: 2019).

This book is the product of a conference hosted by the ANU College of Law’s Centre for Military and Security Law in 2017 and it assesses some of the key law of the sea issues that currently exist in South East Asia and related areas of the Asia Pacific, especially in light of the 2016 South China Sea arbitration. Topics addressed in the book include: maritime security (environmental issues and climate change), navigational rights and freedoms (especially the role of navies and non-state actors), resource disputes, and an assessment of the effectiveness of LOSC dispute resolution mechanisms.

The book launch will be chaired by the book’s co-editor, Professor Donald R. Rothwell, and will include brief remarks from a number of the book’s chapter authors including co-editor Associate Professor David Letts and Dr Imogen Saunders before the book is officially launched by the Chief of Navy.

Following the launch, attendees are invited to attend an informal reception where copies of the book will be available for purchase at a discounted rate. The reception will conclude at 6.30pm.